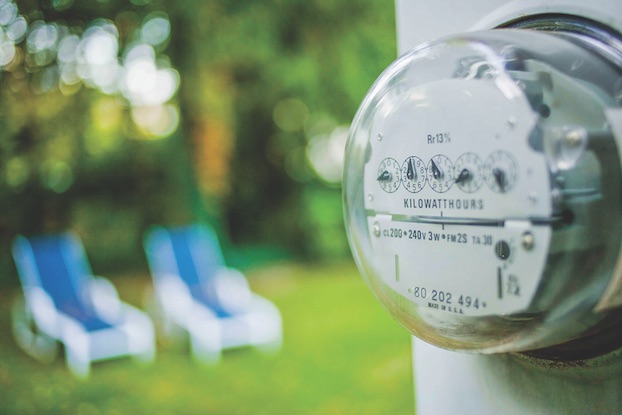 “In simple terms, there’s three parts to every bill,” Frey said, “usage charge, fuel adjustment charge and storm restoration charge. There are miscellaneous charges, but these three will be the bulk of all charges.”

Frey and Mike Francis, 4th district LPSC, fielded questions from the audience after the presentation. Slides showed the jump in Henry Hub Natural Gas Spot Price and compared 2021 and 2022 electric utility bills from different companies. Frey’s was among them. He lives in Baton Rouge.

One woman in the audience asked, “If we pay for all of that, what does Entergy pay for? Dr. James Jankuska asked if Entergy had to pass all the cost of storm restoration to the customer.

Louisiana’s one million Entergy customers will pay $3.2 billion to reimburse the company for its repair costs for storms during 2020 and 2021. All Entergy customers, all storms. Recently, Foster Campbell was the only one out of five public service commissioners in the state to vote against the plan. Campbell is the PSC for District 5, north Louisiana. Mike Francis is District 5 commissioner. His region represents parts or all of 17 parishes. Residents in Calcasieu Parish are served by Beauregard Electric Cooperative, Cleco Power, Entergy Louisiana and Jefferson Davis Electric Cooperative.

“The old way of regulating utilities, they would say my needs are x dollars each year and I want to earn a return on that equity which is about 50 percent of that, that’s something that gets you confused a lot, 10.5 percent. So, the commission would put in the rates and as long as they (utility companies) were happy, they were earning whatever they were earning. That changed 12 to 15 years ago, Frey said.

Now, a target profit is based on the equity portion.

Jankuska said Entergy’s profits have exceeded the 9.5 mark in the past. He didn’t remember getting that money back.

Francis explained, “That’s the corporation. We don’t regulate them.”

Entergy Corp. has Louisiana’s highest paid public company CEO, as reported by The Advocate and the Business Insider. Entergy CEO Leo Denault took a 40 percent pay raise after the storms. According to the Economic Research Institute, Denault earned over $16 million in compensation in 2020.

Ryan Nugent said he called Entergy to question his bill, describing it as a terrible experience with at least three transfers. He wondered if it is prudent for Entergy to keep putting poles back up in the air.

Frey said he thought that like him, most customers without electricity after a storm would prefer to have power restored as quickly as possible. An underground install would take more time and cost much more to pass on to the customer. Entergy has applied for a $450 million federal grant to make its power grid more resilient.

Frey said LPSC constituents in other districts have the same questions as those in District 4. For instance, why doesn’t FEMA or the insurance company reimburse electric providers for damages?

“If the utility had insurance as the cost of doing business, it would be a regulated cost, they would get to recover that cost from their rate payers,” Frey said.

Customers in other districts have also been blaming big bills on newly installed digital meters.

Sharon Bertrand came to the meeting equipped with an EXCEL spreadsheet that tracked bills from April 2021 to August 2022. Her husband said that the last time Entergy was contacted, they said someone would come out for an audit, but so far they haven’t.

Sandra Gobert has lived in a small energy efficient home for the last nine years and now keeps her thermostat on 78 degrees.

“My bill has never exceeded $200 until now,” she said to the American Press. “That may not seem high to some people, but for me, on a fixed income, it is.”

The LPSC is a constitutionally established regulatory agency dedicated to serving the public interest by assuring safe, reliable and reasonably priced services are provided by the public utilities and common carriers subject to its jurisdiction.