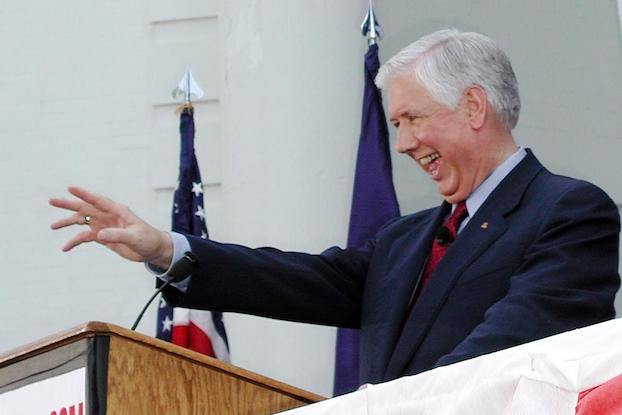 Former Louisiana Congressman Anthony Claude "Buddy" Leach Jr. announces his candidacy for governor on Aug. 10, 2002, in his hometown of Leesville. Leach, who spent one term in the U.S. House and ran the budget committee in the Louisiana House before leading the state Democratic party, died Saturday. He was 88. (Associated Press Archives)

Longtime legislator and Leesville native Anthony Claude “Buddy” Leach Jr. passed away this weekend at the age of 88.

On Sunday, Gov. John Bel Edwards issued a statement on the former chairman of the state’s Democratic Party’s passing.

“Buddy Leach dedicated his life to serving our great state. From the Louisiana Legislature to Congress to his many civic contributions, Buddy worked to make life better for all Louisianans. Donna and I are praying for his family and all who were blessed to know him,” Edwards posted to Twitter.

Leach was born in Leesville in 1934 and served in the U.S. Army from 1956 to 1959. Being raised in a low-income family by a single father in a rural parish endeared him to voters and helped secure him three terms as a state representative beginning in 1968. In 1978, he was elected to the U.S. House, representing the Louisiana’s 4th District.

Though he would lose his re-election bid in 1980 to Buddy Roemer, Leach won one more Louisiana House election in 1983 and served as the chairman of the Ways and Means Committee.

His last public role was serving two years as the chairman of the Louisiana Democratic Party starting in 2010.

Outside of public office, Leach served his state well with his economic prowess. He also served on the board of the Leesville-based Merchants & Farmers Bank for more than 40 years, including 19 as chairman. During those years, the bank was able to expand out of Vernon Parish into the Lake Charles market and its assets grew from $20 million to $500 million.

Leach’s funeral has been set for 11 a.m. Friday, Aug. 12, at Episcopal Church of the Good Shepherd.

Edwards has ordered all flags to be flown at half-staff on the day of Leach’s funeral.