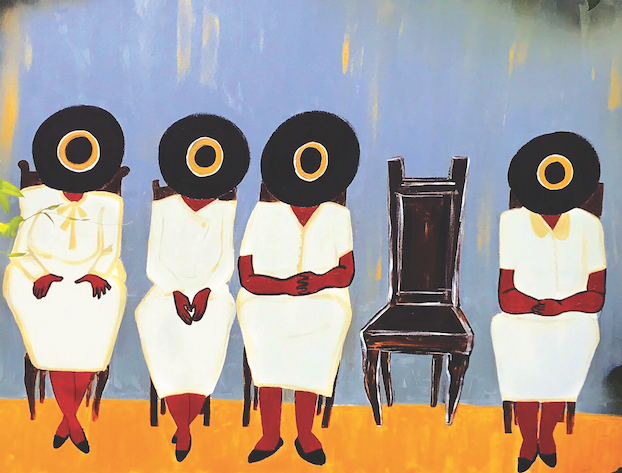 The Black Heritage Gallery will be premiering their new exhibition “Visual Griot: The Art of Brandon V. Lewis” this Friday, August 5 at the Historic City Hall.

This exhibition features paintings that express the African American experience. Brandon V. Lewis, artist and educator and public programs manager of the LSU Museum of Art, said that this collection was inspired by the stories that uplift and explore both his heritage and lineage.

For Lewis, art is a means of historical and cultural record keeping. “I was inspired by a collection of stories from my great-grandmother in particular,” He explained. “She would tell stories in a way that made the people colorful and animated, many of whom had transitioned before I was born.”

“I am telling the stories of my parents, grandparents, great-grandparents and all those ancestors who have transitioned, but left accounts of their experiences while on Earth.”

The “colorful and animated” nature of his great-grandmother’s stories are reflected in Lewis’ work. His pieces are painted with bold colors, and vibrantly depict his families’ historical moments. These moments have a range of emotions, from the humorous joy depicted in “Cake Contest” to the quiet bereavement reflected in “Broken Suster Circle.”

Due to Lewis’ ability to tell stories through visual art, he considers himself a Griot. He explained that traditionally, Griots are “poets, musicians and storytellers who maintain a tradition of oral history in parts of West Africa.”

“I have been blessed to have been given a gift that allows me to tell stories of my people, my community through my work.”

Stella Miller, Director and Founder of the Black Heritage Gallery is a witness of Lewis’ ability as a Griot. “He always tells a story through his art,” she explained. “He doesn’t even have to be there, and you can see exactly what you are trying to portray through his artistry.”

Miller stated that she sees her own experiences in Lewis’ artwork. “His memory is phenomenal. He tells the stories of his family and culture, and what he is able to paint on canvas is extremely accurate.”

The mission to accurately portray black experiences is vital for Lewis. “It is important to unapologetically express the history and stories of the black experience, because the black experience is the major cultural and creative artery of the world,” he said. “The world as we know it would not be what it is if it were not for black men and women.”

“I was raised by a unit of strong and relentless black women and a phenomenal grandfather who served as my father,” stated Lewis on his website. “Women with large ankles and ‘settled bodies,’ who took pride in their appearance and always walked unapologetically in their own truth, men of little words but who possessed tremendous wisdom, those people are the reason I create.”

“I am a custodian of their stories.”

Lewis is a Baton Rouge native. After being admitted to the talented arts program in grade school, He went on to earn his Bachelor of Arts in history, with a minor in fine arts from the University of Louisiana in Lafayette.

He was recently announced as the new educator and public programs manager for the LSU Museum of Art in June. According to the LSU Museum of Art, in his role, he “develops, manages, and implements a cohesive group of education programs that link school and community audiences of all ages.”

He stated that he is honored to be serving in his new position.

“I am very excited for this opportunity. After spending 10 years in the classroom I was ready to begin a new chapter that would still allow me to deal with arts education,” he stated. “My major goal for the education and public programs department is to ensure that the museum is a creative resource for arts educators and the community they serve, and to tell the stories of the artists we represent, and to tell them well.”

The Black Heritage Gallery will be hosting an opening reception for “Visual Griot: The Art of Brandon V. Lewis” August 5 from 5:30- 7:30 p.m. at the Historic City Hall.

Miller stated that they are honored to be able to feature Lewis’ work again after seven years. “He’s a Louisiana artist and an educator,” she said. “It is important for young artists to see and meet accomplished artists. Lewis can inspire these young artists.”

Lewis will be at the opening reception to meet patrons and speak about his art and artistic process.

The exhibition will be on view until Sept. 23.