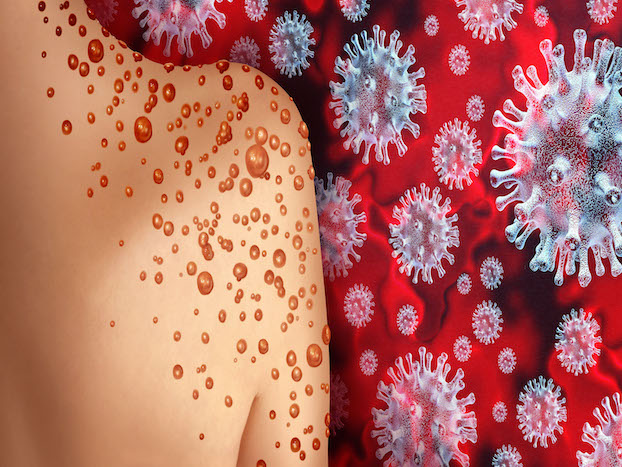 Monkeypox is a contagious infection that causes blisters on the skin. (Special to the American Press)

President Joe Biden’s administration officially declared the monkeypox outbreak a public health emergency on Thursday during a media teleconference hosted by the Department of Health and Human Services.

The declaration was officially announced by Xavier Becerra, secretary of the Department of Health and Human Services. “We are prepared to take our response to the next level in addressing this virus,” he said.

The first case of monkeypox was confirmed in May. Since then, more than 6,600 confirmed or suspected cases of monkeypox have been reported, according to Becerra. The United States has the most reported cases worldwide.

Eight people worldwide have died due to monkeypox, but no deaths have been reported in the United States. The virus is primarily spread through skin-to-skin sexual contact, but it can be spread through any close physical contact with an infected individual or through contact with contaminated materials.

Despite public criticism of the HHS’ response to the monkeypox outbreak, Dr. Demetre Daskalakis and White House National Monkeypox Response Deputy Coordinator, said aggressive action has been taken to counteract the virus.

It is believed that focusing on high-risk areas and demographics will prevent monkeypox from becoming endemic. The groups of interest include: citizens of highly populated area, members of the LGBTQIA+ community, and men who have sex with men. However, anyone is able to catch the virus, and this likelihood will increase if the virus isn’t contained.

The three main ways in which the HHS is working to contain the spread of monkeypox are through increased testing, new treatments and focused outreach and education.

There is currently a capacity to administer 80,000 tests per week. Becerra said this number continues to rise.

Currently, testing is only being conducted at 10 percent capacity, meaning only 8,000 tests are being administered weekly. The HHS is making an effort to encourage physicians to test more frequently for monkeypox. It is also encouraged that three samples are taken during testing to ensure an accurate diagnosis.

Over 1.1 million doses of Jynneos, the monkeypox vaccine, have been stockpiled, with more than 600,000 already delivered. According to Dawn O’Connell, Assistant Secretary for Preparedness and Response for the Department of Health and Human Services, the first order of doses shipped July 29. The next shipment is scheduled for Aug. 15, with additional, expedited shipments to be scheduled monthly until the end of the year.

“It is important to get these vaccines out as soon as possible to those areas that need them,” she said.

The HHS and CDC have been exploring different treatment and vaccine options.

“It’s become clear to all of us that given the continued spread of the virus, we’re at a critical inflection point, dictating the need for additional solutions to address the rise in infection rates,” said Dr. Robert Califf, commissioner of the Food and Drug Administration.

TPOXX, or tecovirimat, is being considered as a potential monkeypox treatment. TPOXX was approved by the FDA July 13, 2018 as a drug with an “indication for treatment of smallpox.”  This treatment was originally tested on animals. The FDA then tested TPOXX’s effectiveness on 359 human volunteers.

The treatment has not been tested on individuals infected with either smallpox or monkeypox. However, Califf expressed confidence in TPOXX’s effectiveness against monkeypox.

A vaccination method called ‘dose-sparing’ is also being considered. “A fifth of the proposed dose would be introduced intradermally,” he said. This means that a small amount of the vaccine would be administered via injections into the epidermis.

“There are some advantages to intradermal administration including an improved immune response to the vaccine. It’s important to note that overall safety and efficacy profile will not be sacrificed for this approach”

“Please know, we’ve been exploring all scientifically feasible options and we believe this could be a promising approach.”

The HHS is focused on fighting against the stigma surrounding the contraction of monkeypox. Daskalakis stated that this is being accomplished by directly working with high risk communities, and by participating in “non-stigmatizing” messaging and educational outreach.

“We’re prepared to take our response to the next level in addressing this virus, and we urge every American to take monkeypox seriously and to take responsibility to help us tackle this virus,” stated Robert Fenton, White House National Monkeypox Response Coordinator. He continued by saying that they are “leaving no stone unturned in efforts to combat this virus.”