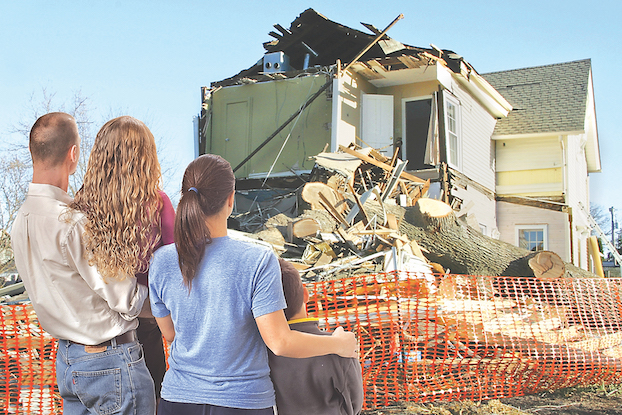 Having a fortified roof can help lessen damage like this after a hurricane. (Metro Creative Services)

In 2023, many Louisiana homeowners will be granted funding to fortify their home’s roofs through the new Louisiana Fortify Homes Program.

Ron Camarota of the Louisiana Department of Insurance Office of Consumer Advocacy spoke on this at the Housing Summit for Southwest Louisiana on July 13.

According to Camarota, the institution of this bill began during the last legislative session. “We put wording into the law that allowed insurance companies to apply for a deduction if people fortify their home.”

This legislation falls under Act 30, which was approved last year. According to the LDI’s Office of Property and Casualty Policy Form Filing Handbook, the act “provides for discounts and insurance rate reductions for residential and commercial buildings built to, or retrofitted to, reduce the threat of loss due to windstorms.” Act 30 was considered effective Aug. 1, 2021.

“The discounts can be pretty healthy,” Camarota said. “One I looked at will offer a 50 percent discount on the wind tail portion of the premium of your policy if you fortify your roof.”

He noted the cost of fortifying one’s roof could range from $600 to $2,500. The LDI made it a mission to aid policyholders in qualifying for these discounts. “Fortifying a roof is not a horrible cost, and the investment is worth it,” he said. “It’s been calculated that the value of the home goes up between 7, 8, 9 percent when you’re fortified.”

“I think it is important, particularly in this day and age, to be sensitive to the trying economic conditions that are out there,” said Fred Malik, managing director of FORTIFIED. “Well that is relatively inexpensive … people are often faced with making difficult choices of ‘what do I spend this $1,000 on.’ ”

Grant programs similar to the Louisiana Fortify Homes Program have been successful in states such as Alabama and Mississippi, according to Malik.

During the regular session, Act 554 was introduced. This act provides for the Louisiana Fortify Homes Program. “We are going to offer grant money to every homeowner in the state to fortify their roof,” Camarota said. “We are doing, in this program, only the roof, which is probably the biggest portion.”

According to the LDI’s Strategic Plan for fiscal years 2023 to 2024, the Louisiana Fortify Homes Program “allows financial grants to retrofit insurable property within a homestead exemption to resist loss and meet or exceed the fortified home standards of the Insurance Institute for Business.”

“The Louisiana Department of Insurance’s Catastrophe Reform Package was a major success for our state’s policyholders,” said Donelon. “We passed several bills this session that will strengthen our market and improve the claims process following future hurricanes.”

The program will be administered under the LDI’s Office of Policy, Innovation and Research once funding is allocated.  Camarota stated they are still ironing out details, and that public hearings regarding the legislation are still necessary. These have yet to be scheduled.

Camarota explained that the standards for proper fortification were adopted from the Insurance Business Home Safety organization (IBHS). “These are not building codes, this is the standard, which we support and have adopted.”

The IBHS houses their standards in the program FORTIFIED. The is a program that was created to promote exceptional building practices to better protect your home.

FORTIFIED focuses on upgrading roofs to protect buildings. “About 90% of insured losses around the county have roof damage,” said Malik. “So it’s highly likely that if you’re gonna have damage, it’ll be in part because the roof got damaged.”

Nail it down, Seal it up and lock it down

Malik cited three primary areas that are focused on when fortifying a roof. These can be broken down into “Nail it Down,” “Seal it Up,” and “Lock it Down.”

“Nail it Down” is the first step that is taken for fortification. This step requires stronger and longer nails that are placed closer together. While this seems like a simple step, upgrading your nails and increasing the amount used can greatly improve the safety of a home’s roof.

“Seal it Up” includes steps such as covering all seams with tape roof cement to effectively seal the roof deck system, while “Lock it Down” focuses on the edges of the roof by ensuring proper flashing is installed and a water intrusion resistant roof cover is installed.

FORTIFIED offers free resources and classes to educate homeowners and contractors alike on these standards with FORTIFIED Wise University. “We try to make it as simple as possible, even for folks that are just getting started with it.”

According to Malik, certification training for contractors takes approximately 3 hours, while evaluator certification takes on average 10 hours. The classes are available 24/7 on IBHS’ FORTIFIED website. “We try to make it as simple as possible, even for folks that are just getting started with it.”

“While we would like for all of the contractors that work on a fortified roof to be trained and certified as fortified wise roofers, it is not a requirement at this time for them to be so,” said Malik. “As we build our network of roofing contractors in Louisiana, we are encouraging them to be trained.”

Those getting certified must also assure that they are able to provide proof that they have all required licenses and adequate insurance.

Malik noted that there tends to be a learning curve for instituting the FORTIFIED standards. “After they go through about 10 houses, they get pretty effective at it.”

“While we have 40,000 homes that are fortified in a number of different locations, when you go into somewhere new it takes time to educate people,” he continued. “When you’re in the early stages of that, we want to encourage and work alongside people who may not have been through that process yet.”

IBHS is enthused to have their FORTIFIED standards regularly instituted in Louisiana. “We have a small, but growing network in Southwest Louisiana,” said Malik. “As the department has made its commitments to incentivise resilience construction, fortified being one of those, that’s certainly creating a level of awareness and opportunity for local contractors to become involved.”

Louisiana organizations such as the Office of Community Development, The Louisiana Housing Corporation,  and the SBP, formerly known as the Saint Bernard Project, have utilized FORTIFIED’s standards over the last couple of years. Malik stated that institutions reported excellent performance and results.

“I think the department should be commended,” stated Malik. “It takes courage to try and change the status quo. It takes leadership to do that.”

“There is a critical point where you have to stop focusing on getting someone to agree with you… to taking action. What the department is doing is they are stepping in and they are making an environment where it is easier to say yes.”

It is important now, more than ever, for citizens of Louisiana to take steps to protect their homes. “We have this ever-present risk… it’s common enough that we really should expect it,” he said. “So, we should try to find ways to break that cycle of destruction.”

“That’s really what the department has decided to do.”

Malik stated that he and the IBHS are excited to be growing FORTIFIED in Louisiana and  look forward to pointing to it as “another one of the successful states in the Gulf Coast.”           It will be imperative that homeowners ensure that the fortification standards are met to qualify for the discounts that participating insurance companies will offer. Camarota explained that not only do the standards have to be precisely met, policyowners must ensure that evaluators are officially certified by the IBHS.

Various insurance companies in Louisiana have begun the application process to give policyowners fortification discounts. The companies and discount amounts are still unknown.

“Every company that applied is still being processed, so we can’t publish what those discounts are yet,” explained Camarota.

Camaroata explained that the discounts will be valid for 5 years. After the initial discounts expire, homeowners can have their homes recertified to maintain their discounts.