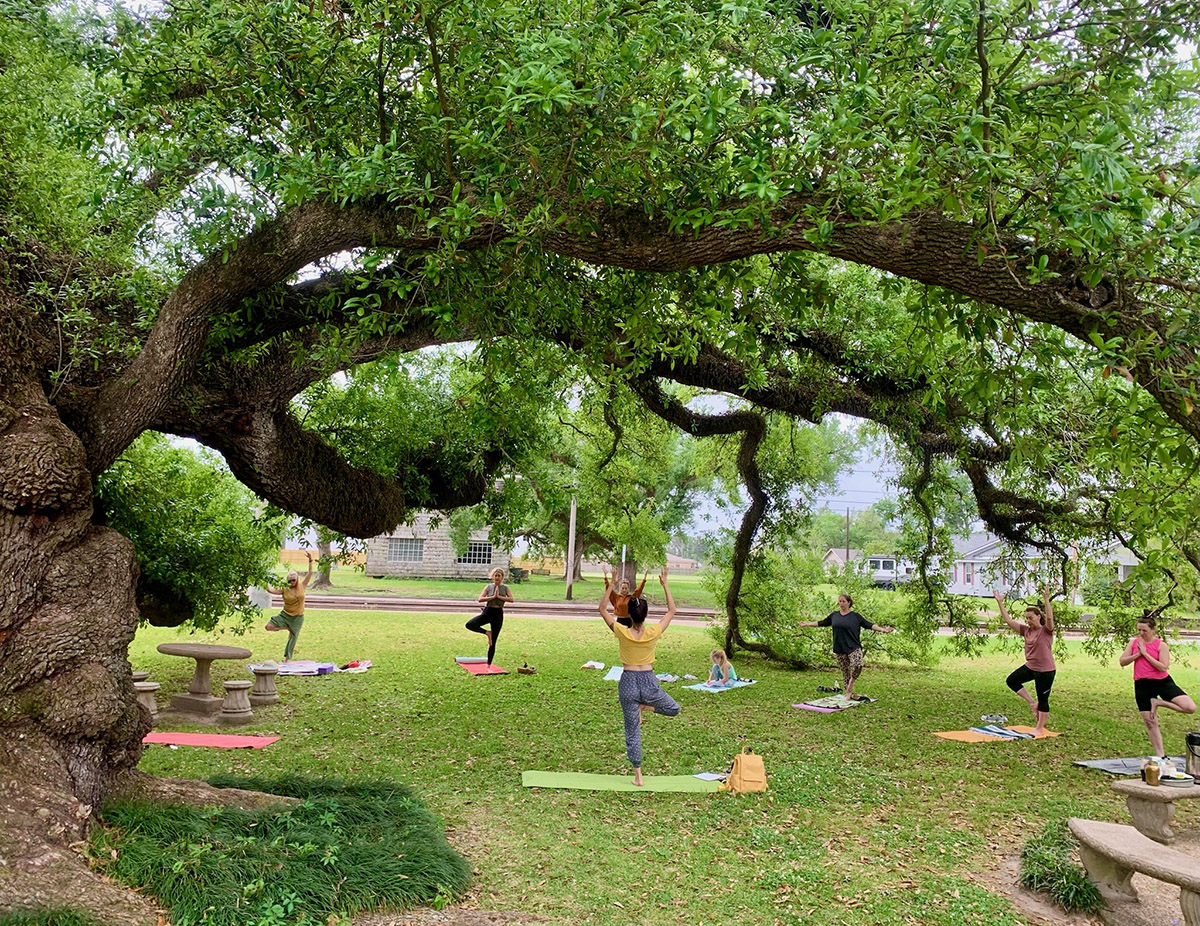 Maegan Gonzales leads Yoga Under the Oak at the Imperial Calcasieu Museum. (Special to the American Press)

Local artist, poet, certified yoga instructor, and college composition educator Maegan Gonzales has come to realize that her propensity to volunteer her time and abilities to others is attributed to her “large-hearted” grandmother.

Gonzales reminisced on how her grandmother would serve at food kitchens, host get-togethers for loved ones, and donate time “to create carol books and wrangling folks together to sing door-to-door and offer joy at Christmas to people she didn’t know.

“These things undoubtedly influenced who I am and are likely the reason volunteering seems more and more to me like something you just do, no questions asked, or at least not many, whenever you can in whatever little way to offer something to someone or the community that helps,” she explained.

She believes volunteers are helpers, “hopeful helpers even.”

Gonzales had not previously considered herself a volunteer. “I’m not exactly selfless, but I am hopeful and I do believe in helping in ways that you’re able, big and small,” she said. “I have always been very interested and concerned about the internal worlds of a person and what effect that has on their community.”

To fulfill her desire to aid others, Gonzales, in tandem with the Imperial Calcasieu Museum, began sharing her yoga practice with community members through Yoga Under the Oak.

“It didn’t take long after beginning to teach that I longed for a yoga community where I felt safe and free in my body and at home in my mind that way I did when I was studying under my teachers,” she said. “It wasn’t until my time at the museum that I truly felt like the yoga practice I had to offer was aligned with what I believed the practice could offer.”

Yoga Under the Oak started small, sometimes only having 2-3 participants.

After moving the practices outside under the treasured Sallier Oak Tree due to pandemic concerns, the program thrived like never before.

“I knew yoga was one of the things that could not be lost with the devastation Lake Charles had faced and we would have to weave the practice back in as soon as we could … so, when the opportunity came, we would find a way because we had to.”

For Gonzales, sharing the practice of yoga is one of the most meaningful ways that she can give to the community.

“When I’m sharing yoga, it doesn’t feel so much like giving myself or my time away as it feels like an exchange.”

She referenced the “slow, gooey, and mindful” yoga practice that she fell in love with is the practice she wishes to share.

“I could cry on my mat after a yoga session especially when I was studying with a teacher to guide me into that space of safety.”

“I wanted to offer people that gooey feeling of mindfulness felt in the body — a feeling that felt so safe and at home in yourself that you could cry.”

She said she believes yoga, at its root, is a form of altruism. “Yoga means ‘to yoke’ or  ‘to unite.’ It’s entirely about union.”

“I wholeheartedly believe in the benefit a yoga practice offers to an individual’s and a community’s well-being,” she explained. “When I’m sharing yoga, it doesn’t feel so much like giving myself or my time away as it feels like an exchange.”

“When we gather under the oak, we’re also gathering with community members — people you may not have met before except that you’re all showing up to practice doing the same thing: acknowledging your breath, moving around a bit, and really just being.”

Gonzales believes “healing and growth are truly made possible through connection and community.”

She wishes for new volunteers to “notice what you’re already doing and see what kind of time you realistically have to offer” and to put out what they wish to see more of in the world.

In her free time, Gonzales is at home with her family, creating, nurturing her plants, and “putzing” around her backyard.