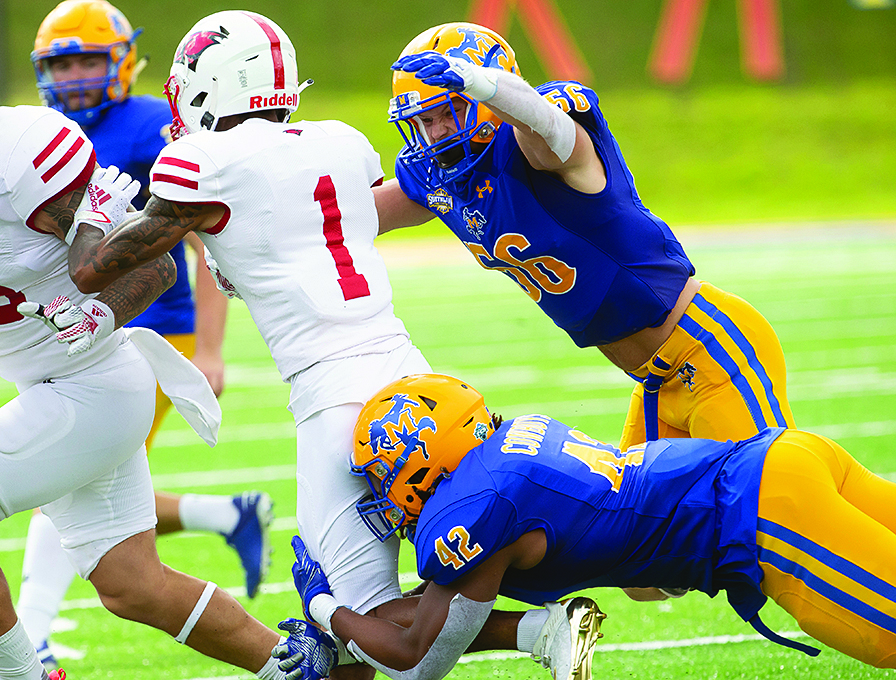 McNeese State linebacker Brayden Adams, No. 56, lunges at Incarnate Word receiver Ce’cori Tolds during an Oct. 23, 2021 Southland Conference game at Cowboy Stadium. Adams made his way back to playing field after three years of adversity, including recovery from knee surgery. This season the junior is counted on as a team leader. (Rick Hickman / American Press)

Seven months after announcing its intent on exiting the Southland Conference Incarnate Word has had a change of heart.

The San Antonio school won’t be heading west, instead cutting a deal with league officials to stay put in the SLC.

“This is huge for us,” said Grant. “It shows the hard work of our board, of our athletic directors and people in the Southland.

“Incarnate Word has been a great partner for us and we are more than excited to have them staying. It shows that our brand is getting stronger.”

The Cardinals are expected to play a full Southland schedule, including football, this season. UIW is the defending SLC football champs, claiming the program’s first title last fall with a 7-1 record. It’s only loss was in Lake Charles to McNeese State.

Grant had previously said the league had plans in place if the Cardinals decided to stay.

“We are working on finalizing those right now,” Grant said. “We want to make the least amount of changes necessary for our teams, players and fans.”

The Cardinals decision means that no team will have to play a conference foe twice in football. Each team had one home-and-home conference series scheduled. For McNeese that was to be Nicholls.

“We don’t want to do that any more,” said Grant. “This should give us good balance to our scheduling.”

This is a big win for the league and the commissioner, who is still in his honeymoon period with his new job. Just 10 months ago the league was on the brink of going under when McNeese chose to stay over heading to the WAC. Since then Lamar decided to return to the conference after just one year in the WAC itself.

“It is great to have them staying in the league,” said McNeese Athletic Director Heath Schroyer. “This is a big for our conference do have another Division I opponent that fits our footprint.

“We really look forward to having them staying in the league. They have become another rivalry for us to have.”

Last November UIW officials verbally committed to leaving the Southland for the Western Athletic Conference. The Cardinals were to be the fifth Texas school to make the move over a two-year period.

But times have quickly changed since then and the WAC isn’t the same anymore. Two of the first four Texas movers that left in July of 2021 are off again on new adventures.

Sam Houston State is heading to Conference USA and Lamar announced just two months ago that after one year in the WAC it was heading back to the Southland, leaving only Stephen F. Austin and Abilene Christian as only original defectors from the league still in the WAC.

SFA officials have proclaimed they are committed to the WAC, just as Lamar and UIW administrators have done before their final decisions.

McNeese was wowed by the WAC and came close to moving until a last-minute deal was cut to keep the Cowboys in the Southland.

Incarnate Word will not have to pay any money for its decision to stay put. The Cardinals hadn’t signed any final moving papers meaning UIW is still a SLC member considered in good standing.

“Since they never left the league they never had to re-apply,” said Grant. “They are just considered a full member and we move forward.”

Lamar will not return as a league member until next summer unless some last-minute deal is worked out. Texas A&M-Commerce does join the SLC at the end of this month as part of its process of moving up from the Division II level.

UIW’s decision means the Southland will have seven football-playing schools this fall and nine overall. When Lamar returns the league will increase its football numbers to eight with a total of 10 schools in the conference unless there is more movement. Grant has stated that the conference is always looking to add new members that fit the league’s footprint.

“We are a gas-tank league,” Grant has said. “We want our fans and families of our athletes to be able to go and watch their teams and kids plays and get home on one tank of gas.”

UIW is coming off perhaps its best athletic year ever. The Cardinals won the SLC’s Commissioner’s Cup for the first time, an award given to the league’s top program in all sports for the year.

Beside football, the Cardinals earned their first NCAA Tournament berth in women’s basketball.

Grant would not comment on rumors that Central Arkansas, which left last summer for the Atlantic Sun, might also be looking to make a return to the SLC.

“I will say we are going to be aggressive in trying to get recruit schools that fit our league’s profile and footprint,” said Grant. “We will listen and talk to those teams and keep in mind what we are trying to do.”