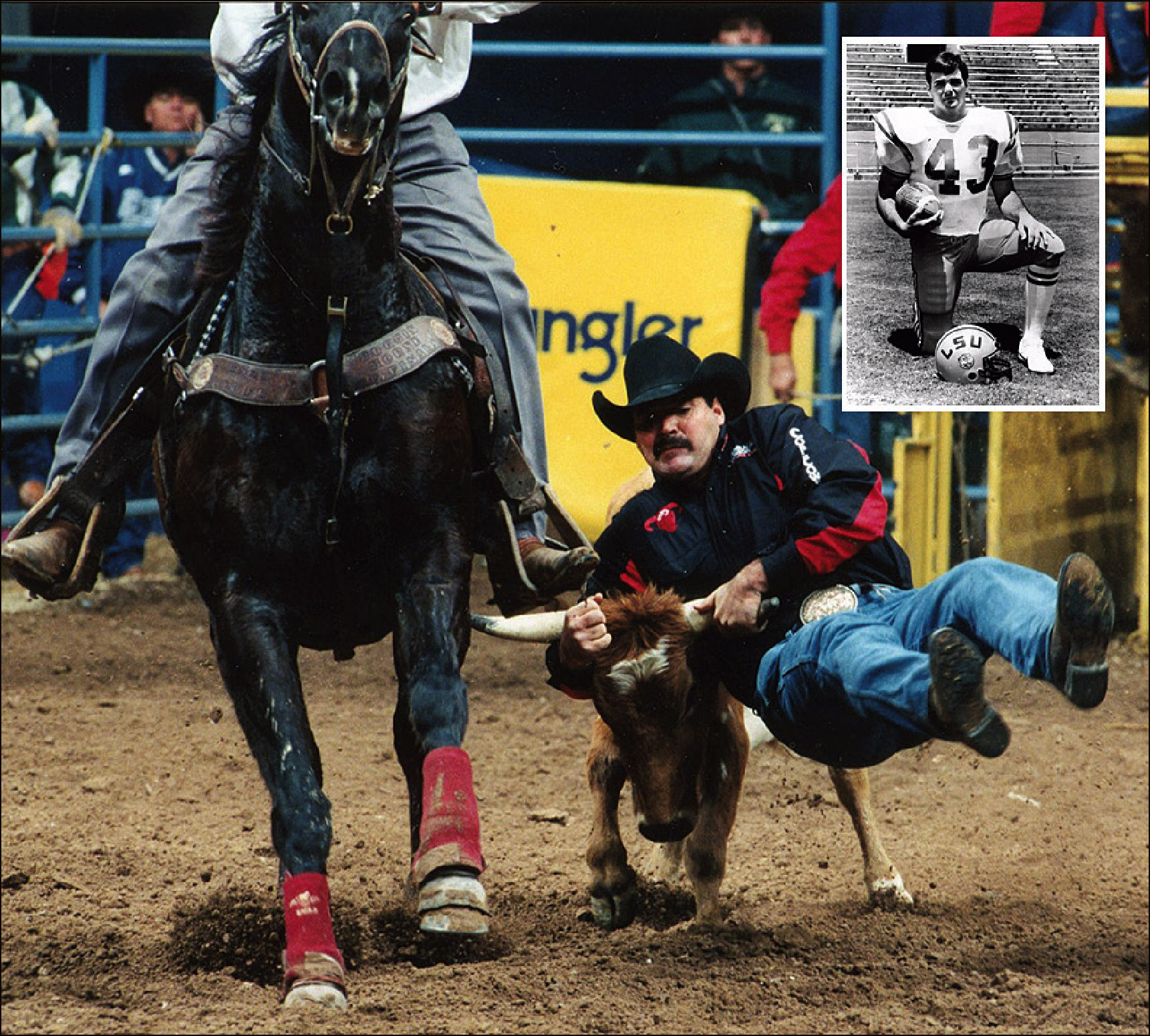 Steve Duhon gave up playing football at LSU for a professional career in rodeo. After a 14-plus-year career as a world champion steer wrestler, Duhon was elected to the Pro Rodeo Hall of Fame in 2003. He will be inducted into the Louisiana Sports Hall of Fame Saturday in Natchitoches. (Special to the American Press)

EDITOR’S NOTE: Seventh in a series about 10 inductees to be enshrined in the Louisiana Sports Hall of Fame on Saturday in Natchitoches.

Through the years, Louisiana Sports Hall of Fame inductees have carved individual paths to greatness.

In a 14½-year career, he won three Professional Rodeo Cowboy Association world championship steer wrestling titles, qualified for eight national finals and was elected to the Pro Rodeo Hall of Fame in 2003.

Duhon was raised as one of seven kids (one brother, five sisters) on his parents’ 44-acre spread with a 22-stall barn just outside Opelousas. It’s where his late dad Billy for 38 years trained horses that raced at Evangeline Downs then in Carencro, Delta Downs in Vinton and at the Fairgrounds in New Orleans.

The family farm is where Steve began his lifelong love of horses and rodeo.

“I’ve always liked hands-on stuff,” said Duhon, 60, who lives on his own farm acreage in Jasper, Texas. “I grew up and always dreamed about doing professional rodeo for a living.

“My idols were world champion steer wrestlers like Roy Duvall and Tom Ferguson. My favorite movie was a (1974) documentary called `The Great American Cowboy’ about the rivalry between veteran Larry Mahan and newcomer Phil Lyne battling all season for the National Finals Rodeo overall championship.”

While Duhon began steer wrestling when he was in the seventh grade — “I was already like 6 foot, 195 pounds,” he recalled — his size and toughness served him well in other sports.

grade and my freshman and sophomore years in high school. Then I had a conflict with baseball and high school rodeo.

“The coaches said, ‘Choose one or the other.’ I chose rodeo.”

Jay Cormier never had a problem with Duhon’s affection for rodeo.

As head football coach for Belmont Academy, a then-tiny Class 2A independent high school in Opelousas, he didn’t care what Duhon did as long as he showed up for practices and games as a devastating two-way player who was a three-time all-state honoree and twice named Louisiana’s best defensive player.

Duhon’s statistics as a high school senior in 1980 were almost mythical. He ran for 3,305 yards as a fullback and made 148 tackles as a linebacker. Word about his exploits began trickling to college recruiters, but somehow didn’t get to then-LSU head coach Jerry Stovall and his staff until it was almost too late.

Stovall, LSU’s Heisman Trophy runner-up in 1962 who coached the Tigers from 1980 to 1983, still has instant recall at age 80 when asked about Duhon.

“He’d already grown up wrestling steers, so you already knew he was a mean sucker,” Stovall said. “He paid attention to detail and he was a fairly respectable student of the game.

“But it was his ability to be tough and stay tough that caught everybody’s attention.”

Duhon wasn’t the least bit intimidated as an LSU freshman in 1981 stepping into a team of bigger, stronger veterans.

“I didn’t take nothing from nobody in practice,” Duhon said. “I hit people. One day when we were supposed to be going half speed to avoid injury, I hit a receiver and knocked him down.

“The coaches and everybody got kind of hot. The receivers coach started getting on me. I told him, `This is my territory. When someone comes across here, he better look for me.’

“(Assistant coach) Bishop Harris jumps in and says loudly, `I told y’all that boy was crazy.’”

But it was the type of run-through-a-brick wall enthusiasm that earned Duhon playing time on special teams and as a backup linebacker in every game of a 3-7-1 season.

The only time he was awed was the season opener against No. 4 Bear Bryant-coached Alabama.

“When we came out of that little locker room door and into Tiger Stadium, I felt just like Tanner in ‘Bad News Bears,’” Duhon said. “I was standing there, looking up and all around. When I looked back down, the rest of the team was halfway to the bench. I was by myself. To hear that many people go wild was unreal.”

It didn’t take long for Duhon to get with the program. Later in that game won by the Crimson Tide 24-7, Duhon was on the punt coverage team when an Alabama returner came sailing up the sideline in front of the Crimson Tide bench.

“I clicked his heels right in front of Bear Bryant,” Duhon said of his fast, well-timed tackle. “I got up, looked at Bear Bryant. He looked at me and he just shook his head. I thought `That’s pretty neat.’”

Duhon finished the season with 19 tackles. But in April 1982 two weeks before the spring semester ended, his love of rodeo could not be denied any longer. He told Stovall he was quitting to pursue a professional rodeo career. He immediately began training for steer wrestling.

After three years of practicing during the week and competing along with his brother almost every weekend in amateur rodeos in Louisiana, Mississippi and Alabama, Duhon decided to turn pro in May 1985 after the season had already started.

He finished 18th in the world and accomplished his goal of winning Rookie of the Year. In 1986, he won the first of his back-to-back world steer wrestling championships.

In those national finals, Duhon set a world record that stood alone for 15 years before it was tied. Riding a horse named Jimmy, he took a steer to the ground in 3 seconds.

“I knew it was fast,” Duhon said. “I didn’t look at the clock until I got back to the box and they announced it was a world record. I thought, `Maaannnn.’”

In his first six pro seasons, Duhon won nine of his 13 career rodeo event titles, the last one in 1990 shortly before he left the sport until 1992 to take care of his ailing father.

“I came home, took a job in an oil field working seven days on seven days off,” Duhon said. “I slacked on my (steer wrestling) practice.

“Daddy (who had heart problems) was confined to the house for a year. When he started feeling better, he said to me `What are you thinkin’ about?’ I said, `I’m thinkin’ of trying it again.’

“He went and bought 20 steers and me and him started practicing. He had high school kids come over Tuesdays and Thursdays to practice and he’d help them for nothing.”

Duhon returned full throttle to the pro circuit in 1992, finishing fourth in the world in ’92. He won his third and final world championship in ’93.

“A lot of people said I had gotten too old and said I was slippin’,” Duhon said. “I showed myself and everyone I still had it.”

Duhon avoided serious injuries in his career until he was sixth in the world in March 1995 and tore knee ligaments. Then, he had a 40,000-point lead in the steer wrestling standings in May 1998 when he again tore ligaments. He still finished fifth in the world.

“After that, I kinda slowed down,” he said. “I kept getting injuries. I’ve had both shoulders worked on as well as my back and a full replacement knee.”

He won one last steer wrestling event in 2000 at the National Western Stock Show and Rodeo in Denver, then decided he was done.

Three years later in November 2003, Duhon’s father, the man who taught him everything he knew about steer wrestling, passed away.

While his dad has been dead for 19 years, it’s fascinating how Duhon has navigated the circle of life.

His oldest son Steven went on to play football and his younger son Dustin joined the rodeo team, both at small Texas colleges.

“It’s kinda my split personality — one played football and one rodeoed,” Duhon said with a laugh.

Like his dad, Duhon has transitioned into a rural life in which he raises cattle, trains and sells horses and most importantly hosts all and any kids who want to rodeo.

“I always have kids come over to practice or something,” he said. “My dad helped as many as he could as long as they were good kids. He didn’t charge them anything. So, I kind of carry on what he did.”

And if those young’uns pay close attention, they may hear some pearls of wisdom that Billy Duhon passed down to his son. There’s one that has served Steve well, all the way from his one-year LSU football pitstop to being honored in two Hall of Fames.

And it’s this: “Never quit. If you go to do it, then do it. If you’ve set a goal, bear down, put your head down and don’t stop until you succeed.”

What’s ahead for Cowboys, season of transition