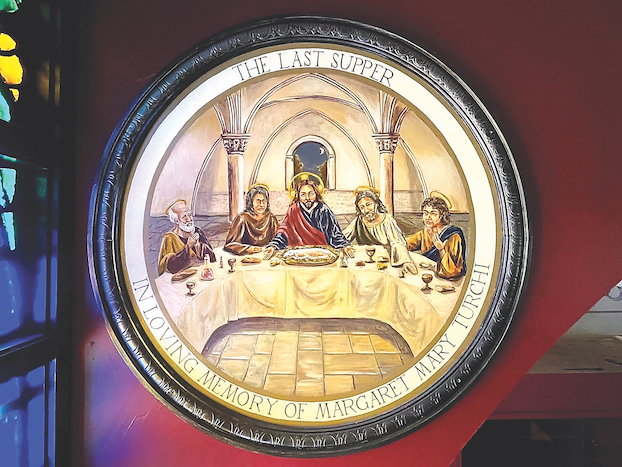 A bottle of Tabasco Sauce is on the table In a circular painting of “The Last Supper” in St. Joseph Catholic Church in Parks, La. (Special to the American Press)

Shane Bernard kept hearing a persistent rumor. For almost two years the historian and curator at the McIlhenny Company, makers of Tabasco Brand Products, had been told there was a Catholic church in Parks, La. that housed a painting depicting The Last Supper. In this painting, on a table in front of Jesus and his disciples, was a bottle of Tabasco Sauce, he was told.

“Every time I drove through Parks, I would  stop by St. Joseph Catholic Church to check it out, but the church was  always locked,” said Bernard in a phone interview with the American Press. “So I wrote a letter to the priest there, Father Nicholas DuPré, back in February, and asked him about it,” said Bernard.

How does one respectfully ask a priest if there is a Tabasco bottle in a painting in his church?

“I have stopped by your church building on the rare occasions I pass through Parks, but have never been fortunate enough to go inside.

I stopped in order to look into what may very well be an “urban myth,” which I have heard from more than one person, and which is: that a mischievous painter, when creating a mural inside the church depicting the last supper, included a bottle of our Tabasco Brand Pepper Sauce on the table in the image. Can you tell me if this is true? I suspect it is not, given the seriousness of the location, but one never knows!

In May, Bernard heard back from the Rev. DuPré. He called Bernard and told him he had climbed up on a ladder to verify it because the painting in question was 20 feet up in the air, mounted to an arch near the cry room. If there was a Tabasco bottle in the painting, it wasn’t a big one, because the priest couldn’t really make it out from the ground.

But once up on the ladder, he saw it. While there is no inscription on it, a tiny red and green Tabasco-like bottle is indeed set in front of a disciple on the far left.

The painting was created in 2005 when the Rev. Bryce Sibley was pastor of the church, said Rev. DuPré. Supposedly it was Rev. Sibley who had the idea to have the Tabasco-like bottle added to the painting, Bernard was told.

Rev. Dupre took photos of the painting and shared them with Bernard, while also sharing it on social media.

With the rumor confirmed, Bernard said he created a digital file of the information to save for posterity, and then it was back to work.

Bernard has served in his current position with the McIlhenny Company for 29 years. In 1993, he was hired for what was supposed to be only a three-to-six-month gig for the company’s 125th anniversary, but the position morphed into a full-time job and he has been there ever since.

Parks is a village in St. Martin Parish, east of Lafayette. In 2020, the population was 696. St. Joseph Catholic Church is located at 1034 Bridge St. The church is part of the Diocese of Lafayette.