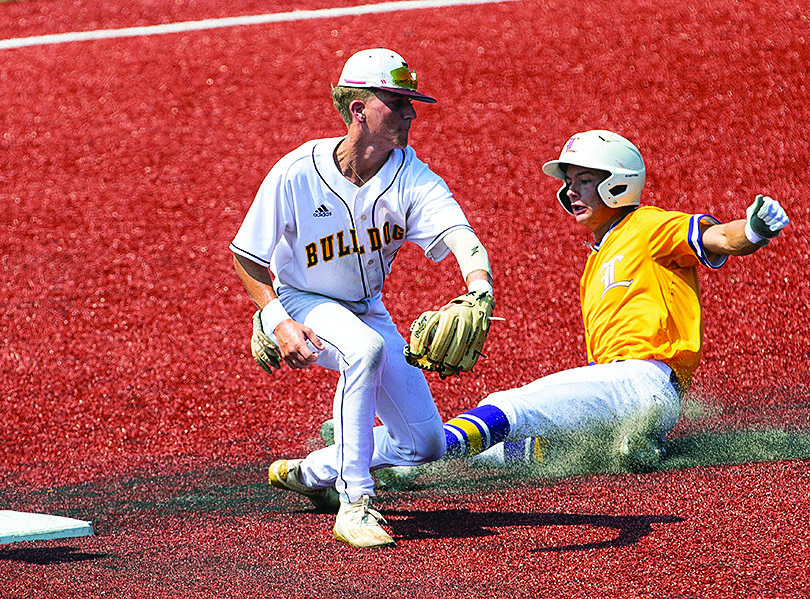 Iota’s Peyton Dupuis makes the catch from home as Lutcher’s Noah Detillier slides in with the steal of second base during a Class 2A semifinal game Thursday at McMurry Park in Sulphur. (Rick Hickman / American Press)

SULPHUR — No. 2 Iota went into the Class 3A semifinals hot, but No. 3 Lutcher quickly cooled off the Bulldogs with big hits early to win 8-1 Thursday at McMurry Park.

Iota scored 58 runs in its first five playoff games but managed a lone run in the sixth on an RBI single by Dawson Wallace with two outs.

The Bulldogs (33-4) struggled against freshman pitcher Marshall Louque and left eight runners stranded on base.

“I think it was the opportunities,” Iota head coach Leonard Cloud said. “Our guy we started has been great for us all year long. He just didn’t have it today, and stuff fell for them. They had two balls fall right on the line. It fell for them and it didn’t for us. We had our chances, our opportunities. We just couldn’t cash them in.”

Iota was playing in the semifinal for the second time in school history after reaching the final in 2018.

“(We talked) about how proud we are of them and the work that they put in for the last couple of months,” Cloud said. “It has really been a blessing to have this group of kids. It is a great group of kids.”

Noah Detillier opened the scoring for Lutcher with an RBI double in the first inning and a bases-clearing double in the second for a 7-0 lead.