This is Home Fest to celebrate local, global artistry 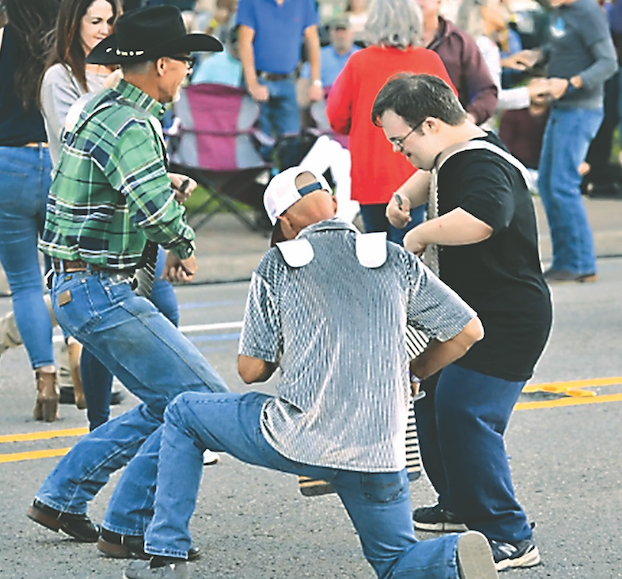 A young man dances in the street as musicians play at the 2021 This is Home Festival in Lake Charles. (Special to the American Press)

The second This is Home Fest, presented by Lake Charles Toyota, will feature more than a dozen local and regional musicians performing in downtown Lake Charles.

The free outdoor festival is from 11 a.m.-10 p.m. Saturday in front of Historic City Hall, 1001 Ryan St., between Iris and Kirby streets.

Jay Ecker, festival director, said the event began with a group of residents who sought to highlight arts and culture throughout Southwest Louisiana. The inaugural event took place last October after only a month’s worth of planning.

“It was a great success,” Ecker said. “We started planning for an annual event in the spring.”

Ecker said the festival’s concept is similar to what someone might experience in Southwest Louisiana.

“If you imagine being in a living room on a Saturday night, they’d be playing music in the living room,” he said. “Downtown Lake Charles is our living room. By presenting our music, culture and food, we celebrate our home.”

This year’s event has expanded to two stages. The Dunham-Price Group main stage will feature headliners Amanda Shaw and Suzanne Santo. Shaw, a rock and Cajun fusion artist, is from New Orleans and a Louisiana Music Hall of Fame member. Santo is from Austin, Texas, and performs rock and blues.

Other local and regional bands performing on the main stage include Red Dirt Revue, the Lafayette-based Bad Bongo, Deuce Jacko and Xydeflo, Ron Fruge and his all-star band Basin Street, Snydley Whiplash, and Julian Primeaux, a Grammy-nominated artist from Lafayette.

The Hometown Stage will feature several local acts, such as Young Band Nation, along with other community musicians.

This year’s festival will also feature The Kids Zone, including the GymFit Mobile Adventures of Baton Rouge. The zone is sponsored by the Junior League of Lake Charles. Area food trucks and food vendors will be at the event, and attendees can visit nearby downtown restaurants. Local artists will have their work on display at the Vendor’s Mall.

A pre-festival brunch is set for 11 a.m. at Panorama Music House, 331 Broad St., and features live music from The RawDawgs. An after party featuring Shaw and Grammy award-winner Chubby Carrier and the Bayou Swamp Band takes place at 9:30 p.m. at Panorama.

VIP tickets are available online and include preferred parking, a covered seating area with a private bar, complimentary hors d’oeuvres, luxury bathrooms and free entry to the after party.

Lawn chairs and blankets can be brought to the festival, but outside food, drink and ice chests are not allowed.

Festival proceeds will benefit The Arts and Humanities Council of Southwest Louisiana, along with other local nonprofits. The event will be held rain or shine.