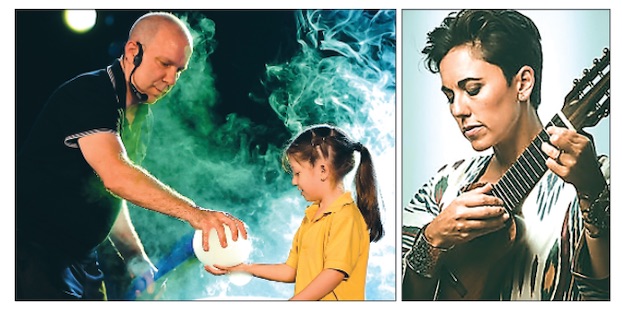 Tickets are $20 for adults, $5 for children, and will be available at the door. Tickets are also included in Banners membership packages.

A free outreach performance for school children and home-schooled students will take place at 10 a.m. in the theatre. Because of limited seating, attendance requires reservations. Please call the Banners Series at 337-475-5997 to make those reservations.

Jeff Boyer takes the art of bubble making to a funny, zany, world-class level. He holds the Guinness Book of World Records for making the world’s biggest bubble. One of his gigantic bubbles even blows its own bubbles!

He also interacts with the audience, so there will be bubble rainbows with people inside. Audience members will make “volcano bubbles” (Boyer’s favorite trick), in which a bubble fills with smoke that then escapes from the top.

Boyer’s mix of comedy, music, and interactive bubble-magic delights audiences of all ages — “especially the dads,” he says. However, there is a less-served group of people he is especially interested in reaching, which is the autistic community.

He insists that his performances be “sensory friendly.” That means he has reduced stimulation levels that might challenge individuals with special needs. For example, lights will remain at low levels. Both light and sound changes on stage will be gradual, and there will be no strobe lighting or lights focused on the audience.

Boyer says that this type of sensory friendly performance is important because many families dealing with special needs have been isolated from the power of a theatrical experience, and the sense of community that theater can inspire. “We partner in creating a safe and welcoming environment where audiences can feel at ease from the moment they purchase a ticket, to the front doors of the theater, to the stage, and on their way home,” he says. “Our performances are welcoming to people with sensory integration needs and for parents with energetic young children.”

April happens to be Autism Acceptance Month, “so we are especially honored to be able to present this family-friendly program – one that is so purposely inclusive – at this particular time,” says Brook Hanemann, Director of the McNeese Banners Series

Boyer has honed his bubble craft for more than 21 years. He studied at SUNY Watertown and Boston Shakespeare Company, but says he gradually brought his calling into focus when he moved into performing for family audiences. He started Jeff Boyer Productions in 1999 and has been wowing audiences internationally with bubbles, science, and comedy ever since.

When Covid cancelled his scheduled tours, he set up free roadside shows for first responders. He was originally slated to come to Lake Charles in 2021. “When he found out the extent of our devastation from the hurricanes, he wanted to come for free!” Hanemann said. “We are thrilled that we are up and running, and that Mr. Boyer can finally come to our community with his message of the inclusiveness of art!”

For more information about Banners Series performances and lectures, see the website, www.banners.org or call the Banners office at 337-475-5123.

The best of Latin music with Texas roots will be heard Saturday night when Gina Chavez performs at 7 p.m. in the Tritico Theatre, McNeese State University, as part of the McNeese Banners Series.

Tickets are $20 for adults, $5 for children, and will be available at the door. Tickets are also included in Banners membership packages.

Chavez was a 2020 Latin Grammy nominee in the Best Pop/Rock Album category. She is also a 12-time Austin Music Award winner, including 2019 Best Female Vocals and 2015 Austin Musician of the Year.

Following a national feature on National Public Radio’s All Things Considered, her independent album topped the Amazon and Latin iTunes charts. Her band’s NPR Tiny Desk concert made NPR’s top 15 of 2015, with more than a million views. An hour-long PBS special resulted in an invitation to be a Cultural Ambassador with the U.S. State Department on a 12-country tour through Latin America, the Middle East and Central Asia. She has been featured in The Boston Globe, USA Today, Texas Monthly and the Austin Chronicle.

She is also a philanthropist. With her wife, she co-founded Niñas Arriba, a college fund for young women in gang-dominated El Salvador. She is featured alongside Oprah, Beyonce, Mahalia Jackson, Dolly Parton and many more in Southern Living’s new book celebrating “100 extraordinary women who have left their indelible mark on the South and beyond.”

Chavis’ multi-ethnic Latin pop music is derived from deeply personal experiences and emotions, especially as a devout Catholic. Her collection of bilingual songs come from her Latin roots and her story of life in Texas as a married lesbian. In 2020, she released the album La Que Manda, (“The Woman in Charge”), which she says is the story of a woman coming into her own power.

“I’ve spent my life playing nice and making myself small,” wrote Chavez. “Then I toured the U.S. and the world and saw how women everywhere – from Nebraska to Uzbekistan to Argentina – know what it means to be silenced in the face of power. This album is for them, for all of us.”