Owner: Empty 22-story Capital One Tower will be repaired 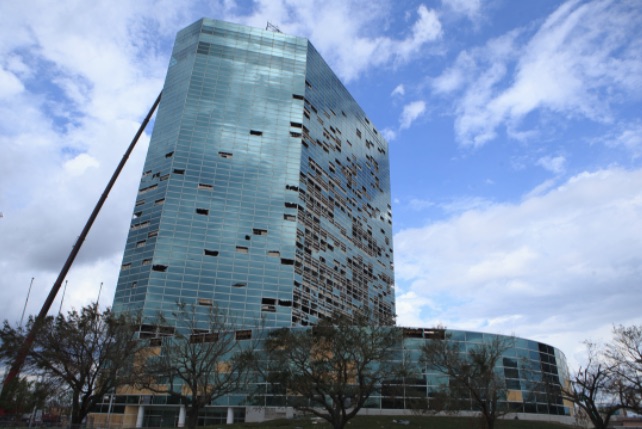 The owner of the hurricane-damaged Capital One Tower in downtown Lake Charles said in a statement Wednesday that there are plans to start “construction of the first phase of the rebuild.” Meanwhile, a trial date is set for June 20 between the owner and its insurer.

The Los Angeles-based real estate firm Hertz Investment Group said in the statement that initial work will include “putting the freight elevator back in working condition, roof replacement, repair of skywalk and a first phase of window replacement.” Hertz has owned the tower since 2007 and is one of the largest office landlords in New Orleans.

“This should provide some meaningful exterior improvement to the aesthetics of the property in the mezzanine plaza area,” the statement reads. “We are excited to begin construction and be part of the regional economic recovery.”

Hurricane Laura’s Category 4 winds in August 2020 left the 22-story Capital One Tower heavily damaged and blew out most of its glass windows. It has remained in major disrepair and unoccupied since Laura’s landfall.

Hertz told the Advocate in January that it was working with its insurer, Zurich American, to settle their claim, with the lawsuit spelling out more than $130 million in costs related to replacement and repairs. The Wednesday statement said Hertz and Zurich have “met in mediation, but unfortunately, were not able to have anything productive come from it.”

Robert Licht, Hertz Investment Group’s chief financial officer, told the American Press last July that the firm understands the tower has become “an eyesore in the community” since Laura’s landfall.

The tower had 73 tenants when Hurricane Laura made landfall.

Lake Charles Mayor Nic Hunter said the city will work to make sure the tower doesn’t sit in disrepair any longer than it already has. City and Hertz officials continue to communicate, Hunter said.