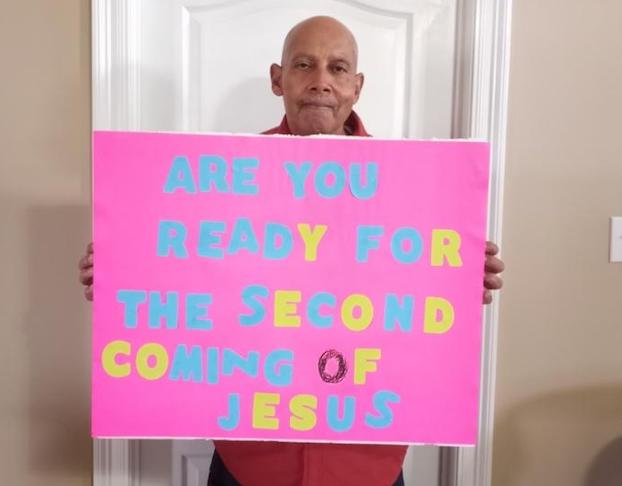 Andrew Gallien is walking out his faith by standing on the corner of La. 14 near Walmart with a sign that reads, “Are you ready for the second coming of Jesus?”

“I went to the city and asked them if I needed a permit,” he said, “but they told me as long as I don’t obstruct traffic in any way, it’s not necessary.”

He does it, he says, because he feels called to do it as a way to share the “love and knowledge” of God and as to carry out the great commission as disciples of Christ are commanded to do in Matthew 28. He said he’s there for about an hour, but not on Sunday. On Sunday, he’s in church.

“I was convicted that I needed to do something more than go through the motions, go to church on Sunday, sit comfortably within those four walls, sing a few hymns, listen to a sermon, say amen, get home in time to watch the game and do it all over again the following Sunday,” Gallien said.

He was hesitant at first to obey what he described as “the call,” a little scared, he said, but he knew he had to “just do it,” knowing the Holy Spirit who gave the direction would not “forsake” him.

“In Matthew 24, after disciples realized Jesus wasn’t going to remove the Roman Empire and hadn’t come to be king in the way they expected, they asked Him for a sign of his second coming and the end of the age,” Gallien said.

Gallien drew a parallel between Jesus’ answer to their request and today’s earthquakes, extreme weather events the world over, the pandemic and a “great sense of hopelessness.”

“I guess a hundred or more cars passed before I got a honk,” he said. “If it makes a difference in one life, it’s worth it,” he said.

His prayer is that God will fill each passerby with the “knowledge of his will through all the wisdom and understanding that the spirit gives,” which is based on Colossians 1:9, he said.

“I just want everyone to experience this gift, this relationship,” he said. “Scriptures teach us that God is not willing that any should perish, but all should come to repentance,” (Matthew 25:41). “I’m not doing this in a judgmental way, I’m doing it because God loves me and I want to show the love of God to others.”

He said Revelation 3:20 says that God is standing at the door, knocking, and He loves His creation so much, he uses different means to speak to each person, not always as they are sitting on a church pew.

“I feel like Jeremiah,” he said. “I feel called to be a watchman.”