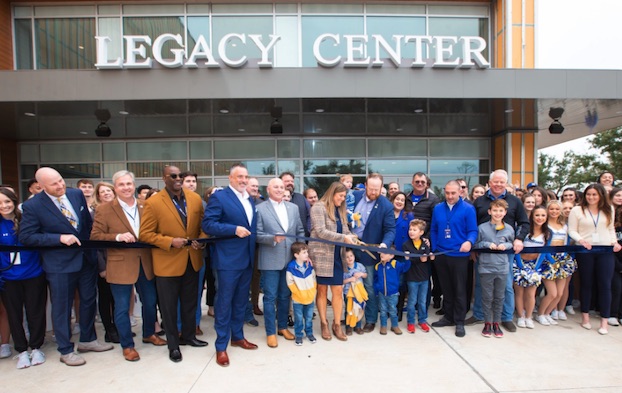 A day that began with a ribbon cutting ended with the rippling of a net.

The six hours and six minutes between the two events turned hype into home at McNeese State Saturday.

Both the school’s basketball teams returned to their on-campus home 17 months after Hurricane Laura forced their exile. That’s just about the same amount of time the basketball teams actually played in the arena. The first game was on Nov. 16, 2018. Their last game before Saturday came on March 4, 2020.

But the reopening of the now-called Legacy Center was completely different from the one that took place in the fall of 2018. Then it was all about setting the stage for the future.

This time, when the doors opened and the fans entered, it was much more emotional. It was about the rebuilding of a campus and community.

“We know what this meant for all of us and our fans especially,” said McNeese men’s coach John Aiken. “I get emotional when I talk about it, but we have been through so much.”

It seems only fitting that as the Cowboys and Cowgirls played their games Saturday and fans cheered, workers were still busy in other parts of the building. It is far from finished but is still ready for action.

When the women’s team was playing the first of the double-header, there was a man laying down the lines on the outer volleyball court just behind the main arena.

That was symbolic of so many of the people in Southwest Louisiana who have moved into their homes while the work of reconstruction continues.

“I may not have been here for all of it, but I have seen enough and talked to enough people to know what they went through and know just how much today meant to them,” said women’s head coach Lynn Kennedy who is in his first year.

Even the players on both teams, most of whom came well after the damaging storms, were aware of all that had gone on.

“We wanted to win for the community and the fans who have been through so much here,” said guard Kellon Taylor.

No group of basketball players have had to endure so much just to get back on their home court. They have played and practiced all over the place waiting for the moment they could step on the court inside the Legacy Center.

They had been told the stories but didn’t know just what it would be like.

“The crowd was amazing,” said Colin Warren. “They were going crazy.”

While the women fell to Houston Baptist the men came up big to save the day.

Zach Scott hit a 3-pointer with under a second left to give the Cowboys the 78-75 victory and put an end to the day.

Then all the players raced over to the section with classmates and celebrated as part of the university like never before.

“You could not write a better story for our first game back,” said Aiken. “I think our players finally felt like they were a part of the campus community.”

The day showed just what is possible and what the future might hold.

Despite all the recent problems McNeese now is home to the best basketball court in the Southland Conference. You could feel the difference in intensity and while the play was never perfect it was aggressive.

“You walk in the building and it just feels different,” said Aiken.