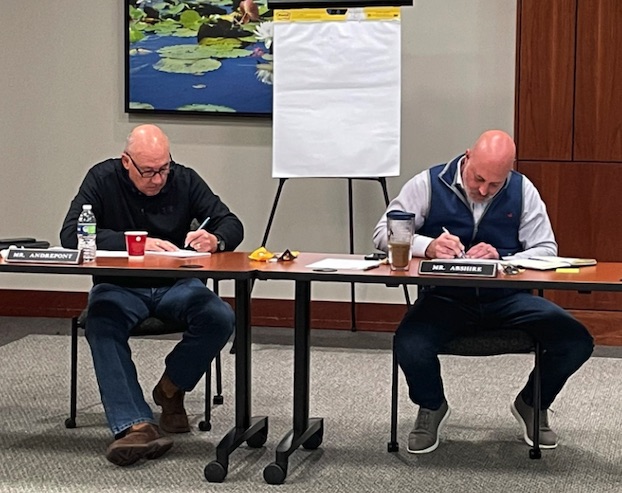 The Calcasieu Parish Police Jury discusses long-range strategic planning at a session today. The goal is to use feedback to set up long-term priorities for the parish. (John Guidroz / American Press)

Calcasieu Parish police jurors during a Friday meeting at the SEED Center identified the issues they consider the most critical in helping the parish improve over the next three years.

The dialogue took input from a strategic plan that the Police Jury approved in 2019. It outlined six key objectives through 2022, based on input by parish employees and department leaders, along with residents. They include: making parish operations more effective; focusing on long-term infrastructure needs; building upon continued efforts to improve drainage; facilitating parishwide development through consistent standards and zoning requirements; supporting strong quality of life measures; and reducing litter and pollution and improving water quality.

Emergent Method — a Baton Rouge-based business management consultant that assisted the parish with the strategic plan — led the meeting. Co-owner John Snow said the various natural disasters that have impacted Calcasieu Parish, combined with the COVID-19 pandemic, have impacted the plan moving forward. He mentioned the need to maximize the temporary post-disaster, pandemic and federal stimulus funding over the next several years. A seventh priority was added that calls for leading continued hurricane recovery efforts in Calcasieu, while prioritizing future resiliency.

Police jurors were asked if the six priorities still make sense today and discussed any missing elements that should be included. District 15 Police Juror Tony Tramonte said communication is key in getting residents to believe that the parish is working to improve long-term issues like drainage and hurricane recovery.

“On social media, they’re kicking our teeth in because we haven’t solved the problem,” he said. “The longer we don’t say anything and explain why it’s going on, the people aren’t going to trust us.”

District 8 Police Juror Guy Brame said the parish’s approach to improving drainage must remain a step ahead of other agencies.

District 9 Police Juror Anthony Bartie said he is optimistic the parish will solve some of its major drainage issues over the next three years.

Discussing standards and zoning requirements, District 10 Police Juror Tony Stelly said residents should be made aware of their surroundings when buying property.

“It’s the thing where a guy with one acre is trying to control the guy who owns 3,000,” he said. “It’s just a communication deal.”

“If we didn’t have this, anyone could go out there and do what they want to do without being able to have public comment,” he said. “It’s good that we have a zoning ordinance … in order for land use to be developed in an orderly way.”

On supporting quality of life, Bares spoke of the need to connect the east and west sides of the parish. Stelly said officials who represent rural areas have more recreation, but lack other amenities, like restaurants.

“As a representative of the smaller community, it’s tough to make people understand why we don’t have facilities like (those) on the west side,” Stelly said. “This parish would be what I would call a premier place to live if those amenities would be spread throughout the parish.”

“We’re never going to be all things to all people,” he said.

Tramonte said Calcasieu Parish should step up its parks and outdoor amenities to compete with larger cities. He said the parks should also be more accommodating for children with special needs.

“If you have housing and people come, then you can fix your parks,” he said.

On litter enforcement, Stelly spoke of the need to address fines immediately. Andrepont said littering will continue if there is a lack of enforcement.

District 5 Police Juror Brian Abshire said most of the calls he receives deal with litter. One major problem is the state Department of Transportation and Development working on larger litter problems along state routes that pass through every city in Calcasieu Parish.

“As much as I’ve begged and pleaded to have parish employees go out to state routes and pick up washing machines and couches, we can’t get everything,” Abshire said. “So, getting DOTD on board with our litter efforts would be tremendous.”
The feedback and suggestions given by police jurors will be used to finalize the seven priorities. Action by the Police Jury on the updated priorities is tentatively set for March.