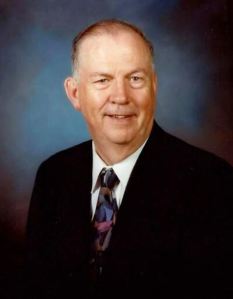 The Rev. T. D. Cardwell was born Dec. 19, 1932 in Athens, La. and passed away Jan. 9, 2022 at his home in DeQuincy, La. at the age of 89.  The Rev. T. D. Cardwell began his ministry as an evangelist in 1952.  In 1965,  he was elected Pastor of The First United Pentecostal Church of DeQuincy and DeQuincy became his home.  He retired after serving as Pastor in 2003.  He was a friend and mentor to many; if you were in the hospital or the nursing home you could count on him showing up to visit and pray with you, it didn’t matter your faith or how far he had to travel, if he knew you, he would do his best to show up.  He was Youth Director for Section 4 from the late 60’s until the early 70’s.  He served as Section 4 Presbyter retiring after serving 27 years.  He was very involved in the community.  He served on the board for Park Place. He was the Parade Marshall for the DeQuincy Christmas Parade; awarded the Civic Service Award in 2014.  He always grew a small garden of tomatoes and peppers.  He carried peppers in his pocket and would readily share them with you if he happened to see you when you were dining out. His famous words when offering them to you were “they’re not hot”.  He was a well respected pillar in the community, loved by many and he will be greatly missed by his family and friends.

He was preceded in death by his son, The Rev. Wayne Cardwell; parents, E. C. and Mary Cardwell; and brother, Carroll Cardwell.