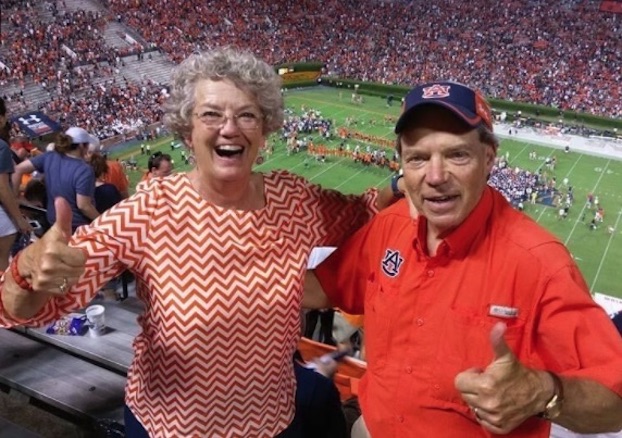 Longtime Lake Charles veterinarian and community and church leader Bob Lofton died Jan. 1. The huge Auburn fan was living in Alabama. He is shown here with his wife, Lela, at an Auburn football game. (Special to the American Press)

The Alexandria native owned and practiced veterinarian medicine at the University Animal Clinic in Lake Charles for 40 years before his move to Opelika, Ala. He was 75.

According to his online obituary from www.legacy.com, he died at home surrounded by friends and family, including his wife of 49 years, Lela.

“He was a solid believer in the Lord Jesus and demonstrated that in everything he did,” James said. “He also had a tremendous love for young couples and taught a newlywed and nearly wed Sunday school class.”

James said Lofton was “very instrumental” in helping make the decision to move the church from the downtown area to where it is now on Country Club Road.

“He was very instrumental in all growth that has taken place at this church,” James added.

Lofton was active in the Lake Charles community with Little League, Scouts and Kiwanis, according to his obituary. He was a huge Auburn fan, and Opelika was only minutes away from the university.

After his move there, he fulfilled the dream of being on staff at Auburn University Veterinary School. After his second “retirement” from the university, he won a seat on the Opelika City Council.

He is survived by his wife and their son, Jesse Robert Lofton; brothers and sisters-in-law Dewey and Karen Lofton Terry and Brenda Lofton; sister-in-law and brother-in-law Sally Melson Phillips and Jody Phillips; numerous nieces and nephews ;and his faithful dog, Grace.