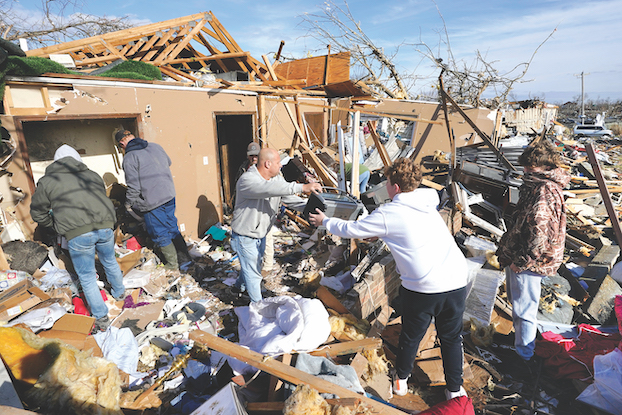 The recovery efforts are just beginning for those in the path of the devastating tornadoes that tore through Kentucky last week. Many families were left with nothing after losing their homes and everything in them.

Southwest Louisiana knows how that feels — and how it feels to receive a helping hand from strangers.

Following President Joe Biden’s visit to Kentucky Wednesday, Gov. Andy Beshear said he requested the federal government pay for 100 percent of recovery costs for the first 30 days, which will include “emergency work, debris removal, emergency protective measures” and “repair and replacement of damaged facilities.” In addition to support from the federal government, Beshear and other Kentucky officials are encouraging people across the country to lend their support.

The United Way of Southwest Louisiana is answering that call.

United Way of Southwest Louisiana President Denise Durel said their organization has chosen the Mayfield-Graves County United Way, which is volunteer-led, as their assistance partner.

“We know from experience what it means to be the recipient of that hand reaching out,” she said. “This is a chance for our Southwest Louisiana community to show someone else the kindness given so freely to us.”

Durel said the United Way of Southwest Louisiana was overwhelmed with offers to assist the community following every natural disaster in 2020.

“We planned to carry that kindness forward when another region was suffering,” she said. “After Hurricane Ida, we immediately began organizing support for Houma. Smaller areas can often be overlooked following a disaster, so we chose a hard-hit region of Kentucky.”

Durel said before Hurricane Laura made landfall in Southwest Louisiana, the local organization was already he recipient of offers from diesel tankers to cooking crews.

“Our Hurricane Relief Center had families and businesses from across the country showing up every day with truckloads of supplies for the community,” Durel said.

Following Hurricane Delta and the winter storm, some people reached out to help again, Durel said.

“We use every opportunity we can to talk about the generosity of everyday people during that time,” she said. “The slow pace of recovery here can make the community think no one cares.”

Durel said for Kentucky, she “cannot stress enough” that a monetary give of as little as $5 can be life-changing.

“The collective impact of many of us giving $5 enables an organization to purchase the items most needed for long-term recovery,” she said. “It also makes sense that the regions trying to rescue and clean up not be overwhelmed with many strangers driving around.

“Our ability to purchase a large truckload of bottled water and have it taken in one load makes it easier for organizations already on the ground working,” she said. “Purchasing bulk deliveries also keeps local store supplies from depleting, especially after the pandemic.”

Donors can text keyword “KENTUCKY” to 40403 or give online at https://unitedwayswla.org/Kentucky. Checks can be mailed to United Way of Southwest Louisiana, 815 Ryan St., Lake Charles, LA 70601. Write “Kentucky” in the memo line.

Durel said funds will be utilized for an immediate response, long-term recovery and fulfilling unmet needs. One hundred percent of donations go directly towards the efforts taking place in Kentucky.

She said one thing she is often asked about from donors is clothing needs.

“Organizations working with victims after an emergency are not typically equipped to deal with cloth, new or second-hand,” she said.

Durel said in the long term, Kentucky will need the same support Southwest Louisiana needed and continues to deal with more than a year later.

“Housing, temporary and permanent, will have to be one of the most significant areas of concern for years to come,” she said.