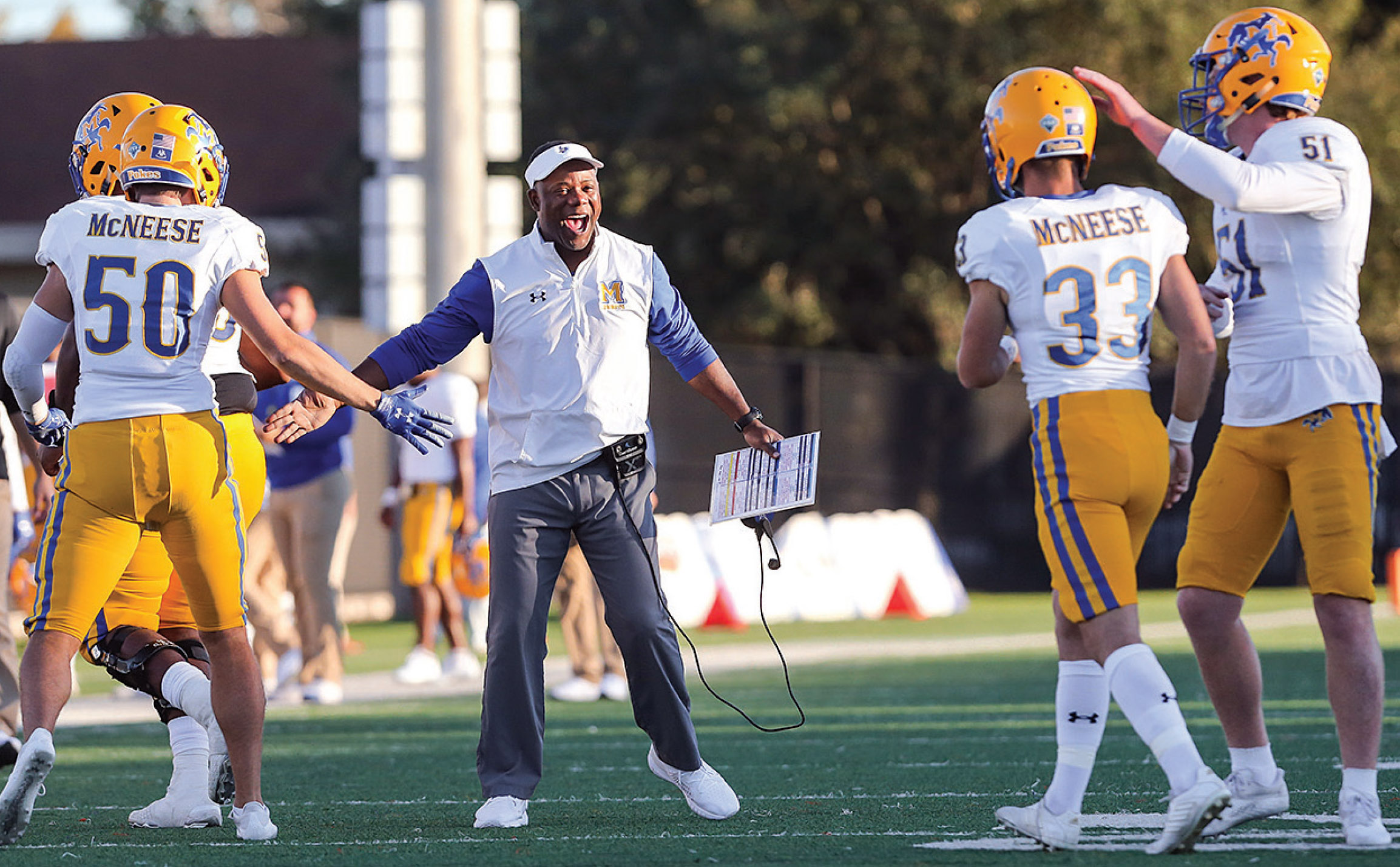 McNeese State head coach Frank Wilson is all smiles after Nolan Heitmeier, No . 33, booted a 23-yard field goal late in the third quarter to give the Cowboys a 31-3 lead against Houston Baptist . It was McNeese’s first field goal since Week 3. (Leighton Chamblee / Special to the American Press)

After 23 months as head coach at McNeese State, Frank Wilson resigned and is heading back to LSU.

Wilson was named associate head coach of the Tigers in charge of recruiting just a few hours after he stepped down at McNeese. New LSU head coach Brian Kelly brings Wilson, the two-time national recruiter of the year, back to Baton Rouge as his first big hire.

“Frank Wilson has a proven track record of identifying, recruiting, and developing elite student-athletes everywhere he has been,” Kelly said. “No one knows the recruiting landscape in Louisiana better than Frank, and his experience and character will be tremendous resources for our staff and student-athletes. His impact on our staff at LSU will be immediate and immense.

“We are thrilled he is returning home to ensure that we continue to sign the best student-athletes in Louisiana and throughout the country.”

Wilson leaves McNeese with two years remaining on his contract. McNeese has already begun a national search to find his replacement. A new coach is expected to be named sooner rather than later.

“I am humbled to have served as the head coach at McNeese State University,” Wilson said in a statement. “While there were unique challenges over the last two years, including two hurricanes that impacted our community and team, I couldn’t be more grateful for how our university leadership and team embraced these challenges.

“Your new head coach will inherit a strong-minded group of young men who have excelled in the classroom and demonstrated a willingness to work that is sincerely inspiring. These young men withstood tough times and many moving parts, but these young men will win. My only regret is that we did not position our team to win the Southland Conference. I will always be a McNeese supporter.”

McNeese was a disappointing 7-11 under Wilson, posting a 3-4 in the spring and 4-7 in the fall. The back-to-back losing campaigns ended a streak of 16-straight winning seasons.

The Cowboys lost their last game of the season to Northwestern State. It marked the first time McNeese lost at home to the Demons since 1988.

Wilson came to town as the man who would lead McNeese State football through the darkness of academic probation and a playoff ban but had to go through so much more, starting with a pandemic that shut down a season.

He had to overcome numerous weather issues since his hiring back in January of 2020, as well. There were a pair of hurricanes, damaged facilities, a bevy of transfers after the Cowboys were placed on a playoff ban. Along the way there was an ice storm and historic flooding not to mention a recent outbreak of tornadoes this fall.

“I want to thank coach (Wilson) for all he’s done over two really, really hard years,” McNeese Athletic Director Heath Schroyer said. “He helped take this program through some turbulent times and I will forever be grateful for his leadership during those times.”

Wilson joined McNeese after four years as the head coach at Texas-San Antonio. His overall head coaching record stands at 26-40.

Before UTSA Wilson spent six years on the LSU staff, serving as running backs coach and recruiting coordinator. He helped LSU to six bowl appearances, including the 2012 BCS championship game which the Tigers lost to Alabama.

“The opportunity to return home to LSU and join Coach Kelly’s staff was one my family and I simply could not pass up,” Wilson said.

McNeese is now left scrambling once again. This will be the fourth coaching search for the Cowboys since Matt Viator left after the 2015 season. The Cowboys have not returned to the Football Championship Subdivision since then.

Lance Guidry was fired after three seasons, Sterlin Gilbert left for Syracuse after just one year and now Wilson resigns after two, both coming in the strange 2021 calendar year.

Even with early signing day a week away, Schroyer said he is under no time pressure to name a new head coach.

“It could happen in two days or two weeks,” Schroyer said. “I want to make sure we get the right person. Sooner than later is my goal but I’m not going to rush and not do my due diligence.”

“I just thought that would be better than naming an interim for a short period of time,” Schroyer said.