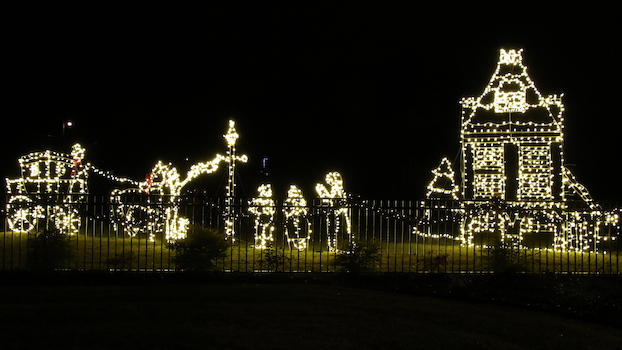 A Christmas lighting display greets visitors to North Cutting Park in Jennings. The city hopes to make the displays even bigger and better next year by including more of the city parks and high traffic areas. (Doris Maricle / American Press)

It was a place where wide-eyed children and their families could ride around and look at the lights.

Guinn is among a group of locals, including the Jennings Garden Club, who are working to bring those lights back.

“I have two kids so Christmas is a big event in our household,” Guinn said. “With a 4-year-old and a 2-year-old, they want to see the lights. They want hayrides and all that stuff.”

In August, the city inventoried its Christmas decorations and found the city had over $300,000 in lighted metal framed ornaments that were just sitting there, he said.

“Some had been used over the years, but they needed new wiring or some of the frames needed to be welded back together,” he said.

Volunteers have been working to rewire, restring and restore many of those lights, which now light up Founders Park and areas along Main Street. Other lighted displays greet visitors to the North Cutting Park just off Shankland Avenue and Louisiana Oil and Gas Park.

“Christmas is such a big time for everybody.” Guinn said. “Anytime that you can increase the quality of life and enhance your downtown appeal, it’s beneficial to everyone, especially the kids. I don’t know a kid growing up that doesn’t like riding around at night looking at Christmas lights and the more you can put the better.

“Our goal this year was to have everything up and ready for Thanksgiving, but we had no idea how much time and energy that would take.”

Plans are to make the displays even bigger and better next year by including more of the city parks and high traffic areas, he said.

“I think next year we will have everything up and running with 100 percent of our inventory in use for next year,” Guinn said.