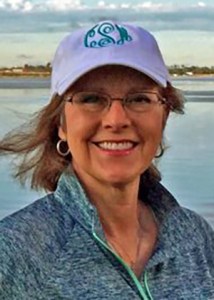 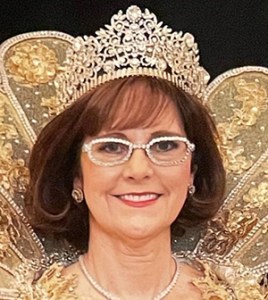 Cammie Moreno Shaddock, 63, died peacefully at home surrounded by her family after a courageous five-year battle with brain cancer.

Cammie was born on September 16, 1958, in Lake Charles, LA, the daughter of Dora “Patsy” Manino and Willie M. Moreno. She was a member of the Immaculate Conception Cathedral Church. She attended Immaculate Conception School and was a 1976 graduate of St. Louis Catholic High School.  Growing up, she danced at Glenda Moss Academy of Dance for 9 years and Ida Winter Clarke School of Ballet, there dancing in “The Nutcracker” presented by the Lake Charles Ballet Society. During her elementary and high school years, she was an outstanding cheerleader, on Homecoming Court and the Valentine Queen. Cammie earned her BS degree in business at LSU where she was a proud member of the Kappa Delta sorority and a “Little Sister” of the Kappa Sigma fraternity.

In 1980, she married the love of her life, Stephen Gorham Shaddock, and began their life together residing in Baton Rouge. She worked for E.F Hutton.  After a short stint of living in Houston, in 1985, Steve and Cammie moved back to Lake Charles where Cammie was involved in several organizations including the Junior League of Lake Charles (where she served on the Board of Directors), Lake Charles Ballet Society, Lake Charles Planters League, Louisiana Coastal Conservation Association (“CCA”), Immaculate Conception Catholic School, St. Louis High School, the Children’s Museum, and the St. Nicholas Center for Children.   In 2017, the St. Nicholas Center for Children created the “Cammie Moreno Shaddock Award for Charitable Achievement” to recognize individuals who have given of their time and talent to the St. Nicholas Center.  Cammie was Queen Katherine III of Krewe du Lac in 1986. Cammie served on the Board of the Krewe of Mystique from 1997 to 2017 and in 2019 was honored as Queen Anna XLVII.

Cammie’s favorite activities were LSU football (win, lose or tie), Mardi Gras, and entertaining at Pointe Fourchon!   She loved to stay at the Lod Cook Hotel on football weekends where she could interact with the players, coaches and old and new friends from LSU. Many of these friends made the trip to Fourchon for weekend fun. Steve and Cammie loved to fish in their boat, the “Cameo”, and entertain their friends there.

During her life, she was blessed with two wonderful grandsons, William and Christopher. “Coco” devoted her life to them, spending as much time with them as possible. They loved to play, read books together, and dance to “Kokomo”.

On October 3, 2016, Cammie was diagnosed with Stage 4 glioblastoma multiforme which is an incurable brain cancer. Despite the odds, Cammie lived a full five years with glioblastoma. In 2017, Cammie wrote a story for MD Anderson titled “My brain tumor Story” which can be found at My brain tumor story | MD Anderson Cancer Center.  The Shaddock and Moreno families will be forever grateful for the skill and care of her surgeon, Dr. Sherise Ferguson, M.D. and the incredible team at M.D. Anderson overseen by Dr. Carlos Kamiya Matsuoka, M.D.  In January 2021, Cammie’s brain tumor returned and with the encouragement of Dr. Ferguson and the team at M.D. Anderson, Cammie underwent a second craniotomy.  In August of this year, the brain cancer returned once again, and there was no effective treatment that would significantly increase her lifespan. Glioblastoma is the most aggressive type of cancer that begins within the brain.  Despite maximum treatment, the cancer always returns.  The typical survival rate is 12-15 months after diagnosis, with fewer than 3-5% surviving longer than five (5) years. Cammie was one of the few who beat the odds and lived a very healthy life for the five years after diagnosis. She was able to spend quality time with her grandsons, William (who was only 3 months old when she was diagnosed) and Christopher who was born in 2018.  As Cammie stated in her story, “My faith, family and friends are my rock.”

The family would also like to thank our friend Arnold Malveaux for taking the stress of driving off of Steve’s shoulders during these nail biting trips to and from MD Anderson.   His help will never be forgotten.

Cammie is survived by her husband of forty-one years, Stephen Gorham Shaddock, and their two children, William Edward Shaddock II, M.D. (Liz Afshari) of Montgomery, TX and Stephanie Shaddock (Will) Henning of Lake Charles and two grandsons, William and Christopher Henning.  She is also survived by her parents, Willie and Dora (“Patsy”) Moreno and her brothers, Paul (Kandy) Moreno and David Moreno, both of whom reside in Lake Charles, LA. Cammie is further survived by her in-laws, William Edward Shaddock, Jr. and Winifred Craig Shaddock, Mary Shaddock (Brian) Jones and Nancy Shaddock Clements. Cammie dearly loved her nieces and nephews, Amanda, Will and Gabi Moreno; Craig Jones (Katie) and Jennifer Jones; and Mary Kathryn and Will Clements.  Cammie was preceded in death by her maternal and paternal grandparents, and her brother-in-law, Richard Don Clements.

A Rosary will be said at 9:30 am followed by visitation from 10:00-1:00 pm followed by a Mass of Christian Burial at 1:00 pm on Saturday, November 20 at St. Martin de Porres Catholic Church, 5495 Elliott Road Lake Charles, LA. Monsignors Harry Greig and Jace Eskind will officiate. The Rite of Committal and burial will follow at Prien Memorial Park Cemetery located at 2220 Country Club Rd, Lake Charles, LA 70605.

In lieu of flowers, donations can be made to The University of Texas MD Anderson Cancer Center (Brain and Spine) Center located at 1515 Holcombe Blvd. Houston, Texas 77030, St. Nicholas Center for Children located at 2519 Ryan St. Lake Charles, LA 70601 or to a charity of your choice.

Words of comfort to the family may be left at www.johnsonfuneralhome.net.