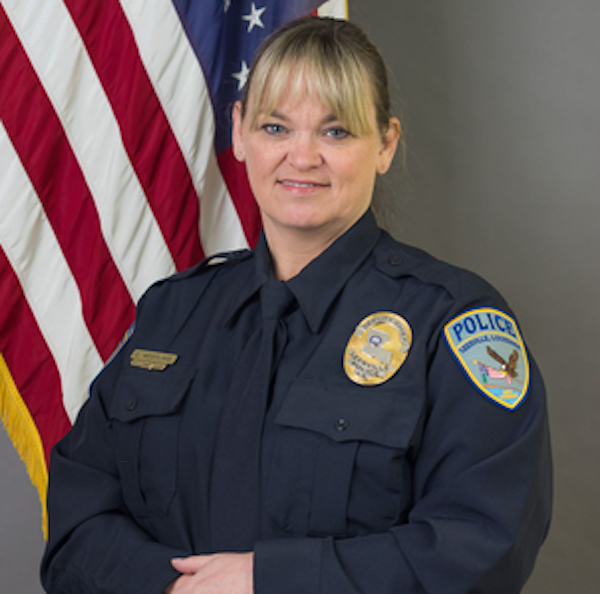 Beth Westlake is the first female police chief for Leesville. (Special to the American Press)

The city of Leesville is under new, but familiar leadership as deputy chief Beth Westlake takes the helm as Chief of Police after being appointed by the Leesville City Council on Sept. 30 following the retirement of Chief Greg Hill.

Westlake has dedicated more than 20 years with the department, but she said she never envisioned herself as police chief.

“It was really never on my radar when I began working here. I actually never expected to have a career in law enforcement at all,” she said.

Westlake began her time at the Leesville Police Department in 1998, one year after she began working in the 9-1-1 call center that operated out of the same building. At that time, she was finishing up her degree in psychology.

“A position opened up in the juvenile department and I thought it would be a great way to continue that line of work – working with kids. I had no idea then that I would end up falling in love with working in law enforcement,” Westlake said.

Over the years, Westlake moved through multiple departments at LPD including patrol and investigations, where she was promoted to lieutenant. She remained in investigations for many years before being selected as deputy chief to serve alongside Hill.

Her appointment now makes her the first ever female police chief or the city of Leesville, but Westlake said that she doesn’t focus too much on that statistic.

“It is a nice accomplishment, that is true. But I would like to think that I have been selected for this position because of my skills and job performance leading up to this moment,” she said with a smile.

Westlake has an evident love for the city of Leesville, and the city has called her back home more than once. A self-proclaimed military brat, Westlake was born at the Bayne-Jones Hospital on Fort Polk in 1973. Her family moved away for six years before returning when Westlake was in kindergarten. Her family would move away one more time before returning for good when Westlake began high school. That environment of constant change helped to foster an ability to be adaptable to any situation, and while she was able to experience life in other states and other countries, Westlake said her family chose Vernon Parish to be their forever home.

“My husband is also military, and that is how we met, but we chose to settle here to be near friends and family and because Vernon Parish is a good community that we felt would be good for our family as well. There are a lot of good people here,” she said.

In looking to the future for the Leesville Police Department, Westlake said she intends to immediately set to work at filling vacancies within the department and to then focus on community involvement.

“I think that’s an area that needs improving. Our mission is to serve the citizens of Leesville with fairness and compassion, and I believe we will achieve that by hiring like-minded officers who want to make a difference in our community. I hope that we can make new relationships within the community and make our community stronger.”