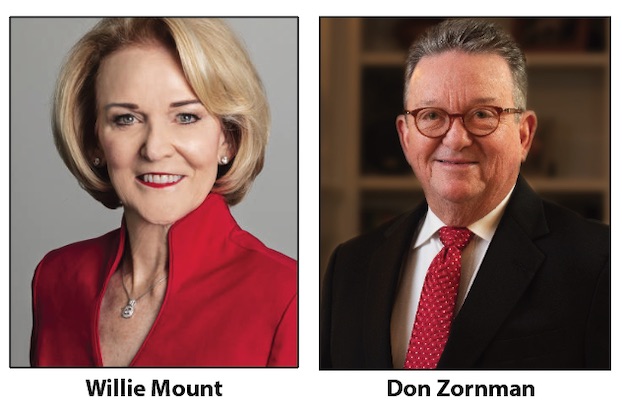 Mount reappointed to state board

Willie L. Mount of Lake Charles has been reappointed to the Louisiana Endowment for the Humanities by Gov. John Bel Edwards.

The Louisiana Endowment for the Humanities acts as a steward and supporter of Louisiana’s diverse and vibrant culture and history. Its mission is to partner with communities, institutions, and individuals to explore Louisiana’s past, reflect on our present, and imagine our future.

Mount is the former mayor of Lake Charles and a former Louisiana senator. She will serve at-large.

Brittain named to therapy board

Kathryn R. Brittain of Lake Charles has been reappointed to the Louisiana Physical Therapy Board by Gov. John Bel Edwards.

Brittain is a physical therapy specialist for Partners in Physical Therapy. She will serve at-large.

MORGAN CITY — M C Bank CEO Chris LeBato has announced that veteran banker Don Zornman has been appointed as the inaugural chairman of the bank’s Greater New Orleans Advisory Board.

Zornman, a graduate of Loyola University, New Orleans and the Graduate School of Banking at Louisiana State University, has more than four decades of banking experience.

Zornman began his 43-year banking career at Whitney Bank, where he became senior corporate lender. He then was market president for the Orleans and Jefferson parishes of Hancock Bank before serving as the bank’s Louisiana Regional President. Most recently, he was executive vice president and regional manager of IBERIABANK.

Throughout his career, Zornman has been active in civic and professional entities. He has served on the boards of the YMCA, WYES public television, Jefferson Chamber of Commerce, Jefferson Dollars for Scholars, Family Service of Greater New Orleans, Maison Hospitaliare, Home for the Elderly and De LaSalle High School.

Zornman also was a representative of the Louisiana Bankers Association and is a past president of Louisiana Young Bankers.

For patients of DDS Dentures + Implants Solutions in Lake Charles, their local dental clinic has a new name. But that’s the only thing that changed. While the dental practice has rebranded to Affordable Dentures & Implants, the clinical and management teams have remained the same.

NEW ORLEANS — Humana, one of the nation’s leading health and well-being companies, has announced that its Humana Health Benefit Plan of Louisiana HMO plan has received the highest possible quality rating for the 2022 plan year from the Centers for Medicare and Medicaid Services.

The Louisiana Medicare Advantage HMO plan, which is offered statewide and has more than 185,000 members as of September, is one of four Humana plans in the nation that received a 5-star rating, reflecting Humana’s commitment to high quality care, patient-centered clinical outcomes and reliable customer service.