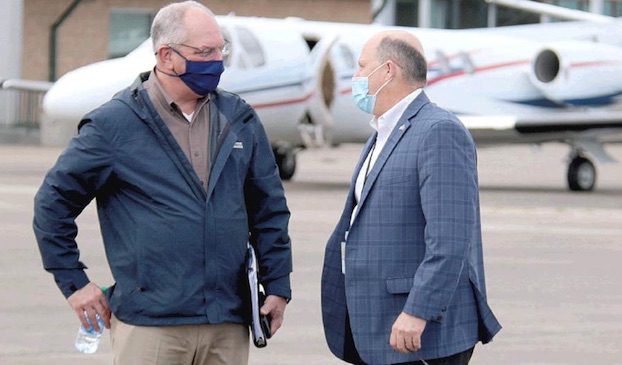 Gov. John Bel Edwards gets a one-on-one briefing from Chennault International Airport Executive Director Kevin Melton during his visit to Southwest Louisiana to discuss hurricane recovery. Chennault was a hub for disaster responders, vehicles and aid after the 2020 hurricanes. (Southwest Daily News Archives)

Chennault International Airport is dealing with an estimated $130 million in repair costs related to Hurricanes Laura and Delta. Still, Director Kevin Melton said Monday the facility remains focused on being a driver of economic development.

“We’ve been working lots of long hours to ensure we’re moving the airport forward, even though we’re trying to recover,” he said.

Several projects are in the works, including a $24 million, 60,000-square-foot readiness center for the Louisiana National Guard adjacent to Interstate 210. Set to break ground in December, it will serve various National Guard units.

Chennault officials broke ground in June on a $4 million air cargo facility that measures 10,000 square feet. The facility should take 12-18 months to build and could initially produce 50 direct jobs.

Work on a $2.5 million administrative building for the Louisiana Department of Wildlife and Fisheries on the airfield’s east side should wrap up by June 2022, Melton said.

Chennault and the city of Lake Charles have wrapped up the transfer of the property that once housed Mallard Cove Golf Course, which Chennault now refers to as Site 1. Melton said Chennault acquired Site 1 from the city in October.

Melton said Chennault is “conducting a major cleanup of the (Site 1) property” to improve its marketability, post Hurricanes Laura and Delta. Part of that effort included coordinating with the Louisiana National Guard to remove an estimated 1,000 trees that were broken and uprooted by the hurricanes.

Chennault is likely days away from signing a lease with Planet Construction, a company that builds Planet Fitness locations nationwide, to use roughly 17 acres of Site 1 to build out office space, an event center and executive-level hangar space, Melton said.

Chennault has also signed a lease with AAHLB LLC, a Texas-based development company, to build an industrial office complex on Broad Street.

At the Oct. 15 Chennault board of commissioners meeting, board members approved for Melton to enter into a contract with Stratigos Dynamics, a local security company. The company will provide the airport with 24-hour security.

“The new security contract includes a more robust and rigorous security program intended to meet the requirements of our current, very diverse airport tenants and prepare for our future growth,” he said.

Chennault also completed in August a project to widen its entry way from two lanes to four, which Melton said helps create “an environment of excellence” at the airport. The two-year project was funded by Chennault.