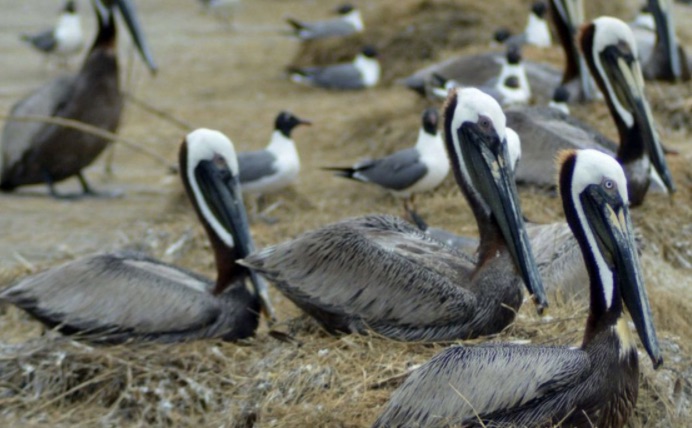 State agencies and officials are celebrating the completion of a $16.4 million effort to restore 102 acres at Rabbit Island in Cameron Parish — Southwest Louisiana’s only Brown Pelican Colony.

Officials said the project is key in protecting Brown Pelicans, which lost half of their nests on Rabbit Island from 2016 to 2018 because of over-washing tides and storm surge. Fifty-four percent of Brown Pelican colonies statewide have been lost.

Funded by settlement money from the 2010 Deepwater Horizon oil spill, the project was done by the state Coastal Protection and Restoration Authority, Louisiana Department of Wildlife and Fisheries and the Louisiana Trustee Implementation Group. Sediment dredged from the Calcasieu Ship Channel was used for the restoration, with grasses and shrubs planted to provide additional nesting habitat for Brown Pelicans and other water birds.

Officials expected nearly 370 nests for the 2021 season, but the Department of Wildlife and Fisheries observed 6,100 nests on Rabbit Island, 1,150 of them being Brown Pelican nests. The department banded more than 320 Brown Pelicans on Rabbit Island with white leg bands last year and this year, with many returning and currently nesting on the island.

State Rep. Ryan Bourriaque, R-Cameron, said the project initially came about through a partnership between the police juries in Cameron and Calcasieu parishes. He said restoring Rabbit Island is “a timely and meaningful investment into one of our most vulnerable coastal areas.”

Chip Kline, chairman of the state Coastal Protection and Restoration Authority, said the authority is committed to restoring and improving habitats for nesting birds and other wildlife in Rabbit Island and throughout Louisiana.

Weeks Marine, a dredging company with an office in Covington, was the project’s contractor. Louisiana-based Royal Engineering designed the project, and RES of Baton Rouge handled vegetative plantings.