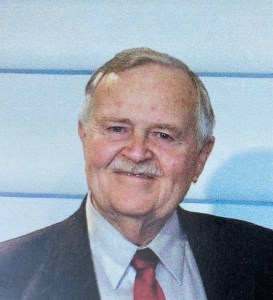 After high school, David went to Abilene Christian College for his bachelor’s degree in Speech, Radio and TV. While at ACC he met his love and best friend, Jo Ann, whom he married in December of 1957.

David went on to earn his master’s degree in 1961 and began teaching at East Texas State University in Commerce, Tx. In 1974 he, Jo Ann and their three boys moved to Lake Charles to work at McNeese State University, he as a professor of Mass Communications.

Outside of family and church, one of David’s greatest passions was the theater. He was a mainstay at the Lake Charles Little Theater and A Block Off Broadway in Jennings for over 30 years. He was also an avid golf fan and taught all of his boys the game as they grew up, treasuring those afternoons of walking down the fairways together. In his later years, he renewed his passion for playing Bridge and could be found at the Lake Charles Duplicate Bridge Club several days each week.

David is survived by his three sons and their wives, David Grey, Jr. and Kelly, Lindsey Bruce and Kayla, Ross Eaton and Penny all of Lake Charles, six grandchildren, three great-grandchildren and several nieces and nephews. His parents, his brother, Jack, and his wife Jo Ann preceded him in death.

A memorial service will be held Saturday, Oct. 2, 2021, at 11 a.m. in the sanctuary of First United Methodist Church at 812 Kirkman St. Visitation will be at 9 a.m. until the time of the service. Senior Minister Weldon Bares and First Christian Church Pastor Vince Endris will officiate.

Mr. Rigney’s Cremation has been entrusted to Lakeside Funeral Home.

The family would like to thank the staffs of Memorial Hospital and Harbor Hospice.

In lieu of flowers, the family asks you to please donate to the CalcasieuCommunity Clinic, Box 91775, Lake Charles, LA 70609.

Mr. Rigney’s family respectfully request the mask be worn and social distancing be practiced for the visitation and service.