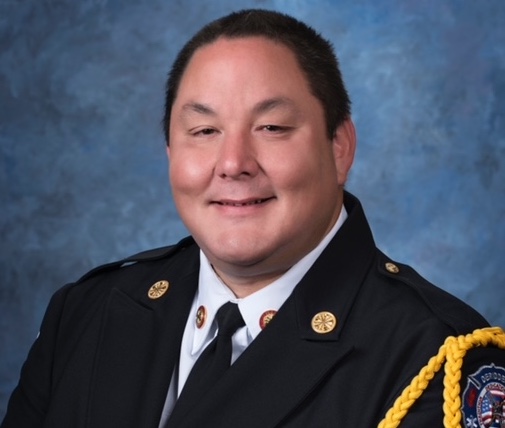 DeRidder Fire Chief Ken Harlow has a combined 28 years in the public safety field, which includes three years spent as the director of the local Office of Emergency Preparedness. (Special to the American Press)

Fire Chief Ken Harlow was honored this month by Mayor Misty Clanton and the DeRidder City Council for his silver anniversary with the city’s fire department.

Harlow said it has been one of his highest honors to spend the past 25 years serving the local community, and admitted he never expected to develop the intense love he now feels for public service.

Harlow has a combined 28 years in the public safety field, which includes three years spent as the director of the local Office of Emergency Preparedness. He has spent the past decade serving as the DFD Fire Chief, but with all of those years working on the frontlines of fire and emergencies, Harlow said it has been the ability to help others improve their lives that has “kept him going” in his career.

“It’s that relationship with the citizens that I love the most. I have met so many wonderful people over the years, and the ability to help someone in their time of need always lifts my heart,” he said.

Over the years, Harlow has found a passion for giving back to his community. He has been a member of the local Lions Club for seven years and is the sitting first vice district governor for the DeRidder area chapter. When he’s not wearing a yellow vest, Harlow can be found serving up breakfast each Friday morning to the local DeRidder High School football team with the Ole’ Dragons booster club.

He also remains active within his church family, and he credits his wife with helping him keep his packed calendar manageable.

“She is an incredible help to me and keeps me on track. I’ve learned that everything is manageable as long as you schedule it right,” he said.

In leading the fire department, Harlow acknowledged the past year and a half has been challenging. With two major hurricanes in conjunction with a pandemic, he said he has learned the true value of the team he serves with.

“I am only one person and there is no “I” in “team. I have a wonderful team with exceptional workers in every position to ensure that we protect the public and the safety of the public. I could not do my job without my awesome co-workers,” he said.