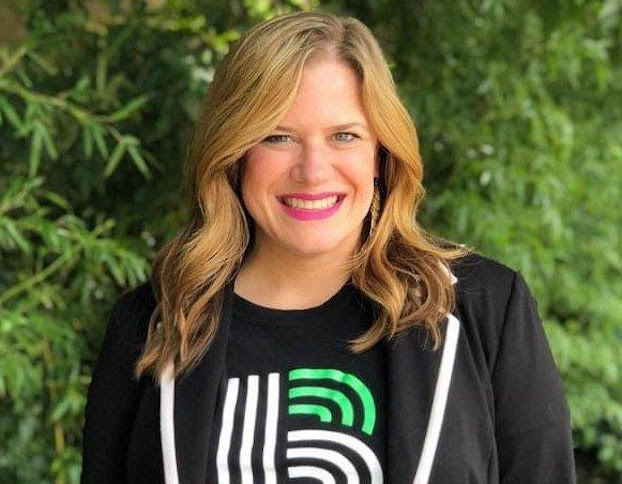 Big Brothers Big Sisters area director Erin Davison said dealing with the pandemic has opened up new ways for the organization to better serve the area. (Special to the American Press)

Pictures of the hurricane- and later flood-damaged Big Brothers Big Sisters offices on Kirkman Street are grim, but the story isn’t over. In fact, it’s proving to be one of resiliency.

“We started out in January 2020, in a really good place,” said the organization’s director, Erin Davison. “We made 47 matches with new Littles and were engaging our school-based programs, our mentoring programs were going really well, and then March 2020 happened and the country and the world shut down.”

The nation’s largest donor- and volunteer-supported mentoring network, Big Brothers Big Sisters makes meaningful, monitored matches between adult volunteers (“Bigs”) and children 5 through young adulthood (“Littles”). The goal is to promote the mental health and well-being of thousands of children served across America.

Traditionally, the programs are meant to be one-on-one, but when COVID-19 started shutting down communities and creating a need for social distancing, the organization stepped up to find innovative ways to continue serving the community.

“Our mission is for our Bigs and Littles to spend time together, hang out, and build positive connections and trust; it’s literally like having a big brother or big sister,” Davison said. “We help create that older sibling-type of mentor relationship. Within 24 hours we had to figure out how to keep our mentoring mission alive and navigate around a critical time of the pandemic. All we knew at that point was we had to stay home, we had to stay healthy and we had to isolate.”

Davison said what hurt most is that 39 or those new matches had to be shut down because they were school-based through the Lunch Buddy, Reading Readiness and high school mentoring programs. In those programs, the matches only meet at the school sites.

“I was so concerned with the morale of the participants, asking myself if they are going to be mentally OK, will they make the connections they need because at that point everyone was in isolation,” she said. “But then we had the 2020 pivot and our national leadership team created standard waivers that let us navigate virtually with mentoring. It allowed us to be more flexible in the community, which actually opened more doors with different generations of members.”

By launching virtual activity and using grant money to provide the technology participants would need to be engaged, 59 new mentoring relationships were ultimately created by the end of the year.

“I’m telling you, that was the dedication of our team here, not me, them,” she said. “They wanted to make sure our BBBS family was safe and healthy and if they needed resources then we would get the resources for them, especially those who were grandparents raising their grandchildren alone at home who are in that high-risk category. We made sure they had food in their house, that their medication was being delivered. We actually did more in the last 18 months than we normally do because we were so intentional about health and safety.”

For those who could meet in person, matches would spend time together in outdoor settings, such as area parks. Other Bigs met their Littles in their driveways or sat in the parking lots of apartment complexes to make sure they got to interact. If not that, teams utilized FaceTime, texting and Zoom.

“We literally let our Littles and their parents decide what was best for them,” Davison said. “We asked and listened and did what they needed.”

Then Hurricane Laura hit and their world was shaken again.

“I really thought after Laura hit, that we might not survive as an organization,” she said. “But we figured it out.”

Davison’s home was badly damaged so she set up shop at her mother-in-law’s home outside Beaumont, Texas. For the first four weeks following the storm, their sister agency in Houston took over the matching programs and health checks while the Southwest Louisiana staff navigated their own personal recoveries.

“When we finally got to be all together again, seven days later we evacuated for Hurricane Delta and we did it all over again,” she said.

Their building endured “catastrophic damage” with $400,000 worth of damages from the storms, she said.

“It’s been tough, we had to sue our insurance company because we did not reach a fair mediation settlement so we are now in the process of going to court,” Davison said. “The building will actually be ready next month, but all the repairs that have been made have come out of pocket from the organization. I’m hoping we can still find a fair settlement before we go to court. We just need to get that incurred cost just to pay ourselves back.”

Despite their own hardships, the organization was able to receive recovery grants that allowed them to provide for participating families who were forced to navigate their own recoveries with limited sources.

“Let’s face it, not everyone has the best insurance so we were able to provide them with gas money and food replacement costs,” she said. “We tried to come in and find resources through the United Way, CareHelp, Dewanna’s Closet and Catholic Charities. We worked together to find what our Bigs and Littles needed so they didn’t have to pay out of pocket, especially coming off of a pandemic where people where in and out of work who were now trying to find money for repairs because of high deductibles.”

She said the organization was able to stay consistent and very few of their matches closed.

“We’ve gone through two hurricanes, both our building and our temporary office space flooded in May, but we’ve made it,” Davison said. “Our Bigs are happy, our Littles are happy and our Littles are making good decisions despite the really crazy year they’ve lived through. They are self-confident, happy and some of the coolest people I’ve ever met.”

Davison said two of her favorite quotes are “Rome wasn’t built in a day” and “Everything happens for a reason.”

“When I wake in the morning, the first thing I ask is, ‘What am I going to do today that’s going to be the best that I can be.’ There’s a lot of things I’m not the best at, but I try to find gratitude because it’s easy to slip in a negative mindset. I also have to remind myself that Rome wasn’t built in a day and what has happened, especially over the last 18 months, has taught us what resiliency really means.”

She said despite the trials, the organization has been able to flourish in ways they wouldn’t have perceived.

“With having to be forced by a global pandemic to bring in technology, we now have a software-based system that doesn’t tie us down to our desks; we can meet the community where they are. This pandemic has really allowed us to better serve our six parishes. We can literally work from anywhere in any part of our parishes and it’s opened more doors in our rural areas such as Merryville and Oberlin. We completely changed our mindset and we’re even more connected.”

They have also had to get a little bit more creative with their fundraising events.

One new way is a partnership with local artists to bring “Farm to Table(eaux)” to life. The event is set for 5:30-9:30 p.m. Oct. 14 at the Lake Charles Civic Center’s Mezzanine and Buccaneer Room.

Tableaus are a group of models or motionless figures that represent a scene from a story or moment from history.

“We’ve provided stipends to local artists from grant money we received so they can create the tableaus, a first-of-its kind event for our area,” she said. “It’s going to be really fun, not stuffy. We just wanted to have a fundraiser that we could bring something to life that would be very cultural and meaningful.”

Attendees will dine on local cuisine, enjoy creative tableau vivants, and can bid on a Mystére Box worth $10,000. Jairus Daigle as well as The Eighty-Eights will perform and attendees can also meet the larger-than-life local figures represented in the annual Living History Cemetery Tour.

Tables of six or individual tickets can be secured here at farmtotableaux.com/event/bbbsswla/

Golf for Kids Sake will also return at 8 a.m. and 1 p.m. Nov. 5 at the Lake Charles Country Club. Four-person golf teams will tee off for a cause with food and drinks provided. Registration will begin soon at www.bbbsswla.org/events/golf-for-kids-sake.

Ruth Sullivan, pioneer in the study of autism, dies…