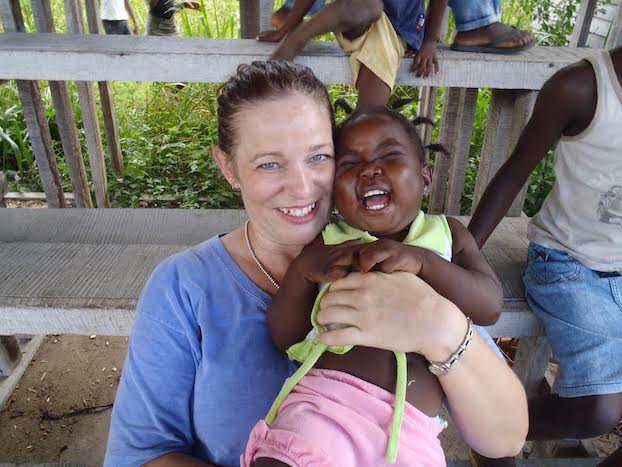 Carmen Miller was able to accompany children from FBCA of Moss Bluff and their parents on a mission trip to the interior of Suriname, Diitabiki. She is shown here with one of the Aukan children. (Special to the American Press)

The faith journey of Carmen Miller began at home. It took her to a small country in South America for five years. Now she’s home again, helping care for parents who held nightly family Bible studies and prayer time for three children in the middle of their full-sized bed. The teen-aged Miller who thought she would grow up, get married and have at least eight children is the single 51-year-old chaplain at First Baptist Christian Academy in Moss Bluff where she “talks to children about their heart,” she said.

“I do everything from bandaging a finger to helping them check their heart,” Miller said.

The school has children as young as 2 — there for Mother’s Day Out — up to eighth graders.

“I grew up in church my whole life,” she said. “My parents were Christians, not just church attenders. They served and loved and lived out their belief.”

Miller made a profession of faith (a public declaration) and was baptized when she was 7. On Nov. 29, 1983, she was at a church service at First Baptist Church of Moss Bluff when she sensed God’s presence.

“He said to me, ‘Carmen you know all about me, you know Bible verses and songs, but you don’t know me,’ ” she recalled.

Her prayer was to make Jesus Christ the “boss of her life.”

After getting her Bachelor of Science in radiology at McNeese, she continued to have the feeling that God wanted her to do something for Him. She moved to Memphis to attend seminary. During the day she took classes. She worked full-time at night as an X-ray and lab technician.

Friends Charles and Brittany Shirey were missionaries in Suriname. Miller had been on mission trips since her youth. The mission of her church group’s first visit there was to build a radio tower to broadcast Bible stories to the Aukan people in the interior jungle. Ironically, the village witch doctor helped harvest the wood with which the broadcast station would be built. She headed up a medical mission trip with doctors and nurse practitioners.

Charles was home on furlough when Miller asked him for help with a project.

“While I was there, he asked me to pray about becoming the chaplain at the school in Suriname.”

When she saw him again, he asked her if she’d been praying and her answer was, she didn’t know what a chaplain did. She couldn’t even know how to spell it. He asked her to pray about it again.

“Something was going on in my heart, some change, and I didn’t know what it was,” she said.

She began to pray. In the midst of trying to memorize the Bible story about Jonah, the reluctant minister who laded in the belly of a whale, she got to the verse, “Now the word of the Lord came to Jonah the second time…”

God was telling her he was giving her a second chance. She didn’t think much of God’s timing, she said with a chuckle; she was memorizing Scripture. It was then she remembered when a word of the Lord came to her the first time. A minister had asked her to be involved in the children’s ministry at his church. She didn’t pray about it. She just told him no. She called Charles.

“I think God wants me to come down there,” she told him.

Her parents weren’t keen on the idea. She wasn’t totally convinced, but a conversation with a friend and mentor Vickie Barto and a verse in the Bible at the right time helped her decide. The verse was Joshua 1:9: “Have I not commanded you? Be strong and courageous. Do not be afraid. Do not be discouraged, for the Lord your God will be with you, wherever you go.”

When she was given the contract to sign and she saw the yearly salary, in black and white, a little more than $7,000, she froze. She knew it would be that amount. But there it was right in front of her in writing.

She finally signed, but she was full of doubt. On her way back from pre-field training, she passed under not one, but two overpasses with graffiti that read, “Trust Jesus.”

When Miller returned to Moss Bluff in July of 2013, it wasn’t long before her mother was diagnosed with ovarian cancer. Her mother has had two surgeries and told her family, “Whether God chooses to take me home or walks with me through this, I win either way.”

Her father, always active and hard working, was diagnosed as having Lewy Body Dementia and depends on Miller. She doesn’t think now is the time to inquire about nursing homes. She’s worried that pandemic lock downs could keep her from visits.

“There are days I don’t pass the test,” she said.

On those days, when the load seems heavy, she turns to Psalm 3. One of the verses is, “I lie down and sleep; I wake again, because the Lord sustains me.”

For anyone who has ever felt like God wanted them to do something and they still haven’t figured it out, whether they are 7 or 70, Miller suggests, “Don’t worry so much about what you’re going to do that you’re not about His business right now. He’s planted you where he wants you.”