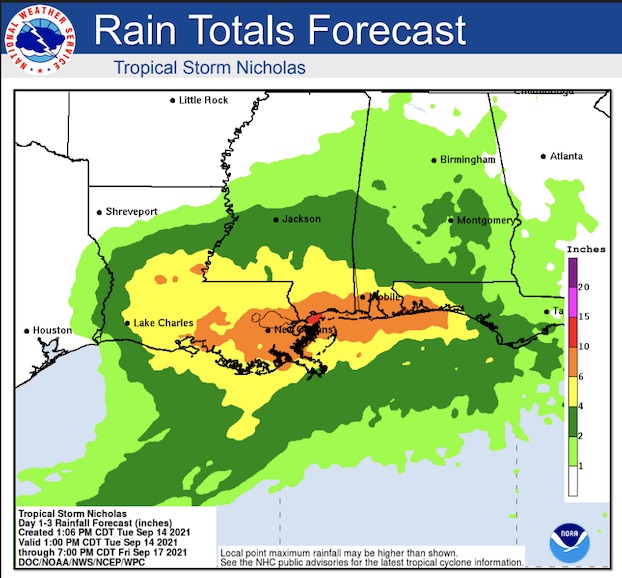 Nicholas rapidly weakened as it made its way over land Tuesday morning, while continuing to cause widespread rainfall over Southwest Louisiana.

Nicholas made landfall as a Category 1 hurricane with maximum sustained winds of 75 mph just after midnight Tuesday near Sargent Beach, Texas.

At its peak, more than 500,000 homes and businesses were without power in southeast Texas — including the Houston area — Tuesday morning, according to poweroutage.us.

The system was downgraded to a tropical storm by Tuesday afternoon and is expected to weaken to a depression overnight before dissipating Wednesday or Thursday in Southwest Louisiana.

The good news, he said, is there’s not a lot of rain on the west side of the storm that will follow Nicholas after it passes through the region.

“Southwest Louisiana will be on the down trend tomorrow afternoon, but the moisture Nicholas leaves behind will give us pretty high daily chances of rain,” he said.

Jones said wind gusts can be expected with the stronger rain bands moving within the storm, but they won’t be strong enough to cause significant damage.

“After consulting with local officials, we are prepared to welcome students, faculty and staff back to our campuses,” said Holly Holland, CPBS spokesperson. “We appreciate the understanding our families have given us this week, as weather closures are some of the most challenging decisions to make. We want more than anything to provide a school year as normal as possible for our students, but safety will always come first.”

All city of Lake Charles administrative offices and services, including City Hall, will resume services as well today. Trash that had been scheduled to be picked up Tuesday will be picked up today; Thursday and Friday routes will run as normally scheduled.

All Calcasieu Parish Police Jury offices and services will reopen today, as well.

Nicholas weakening as it moves toward SW La.