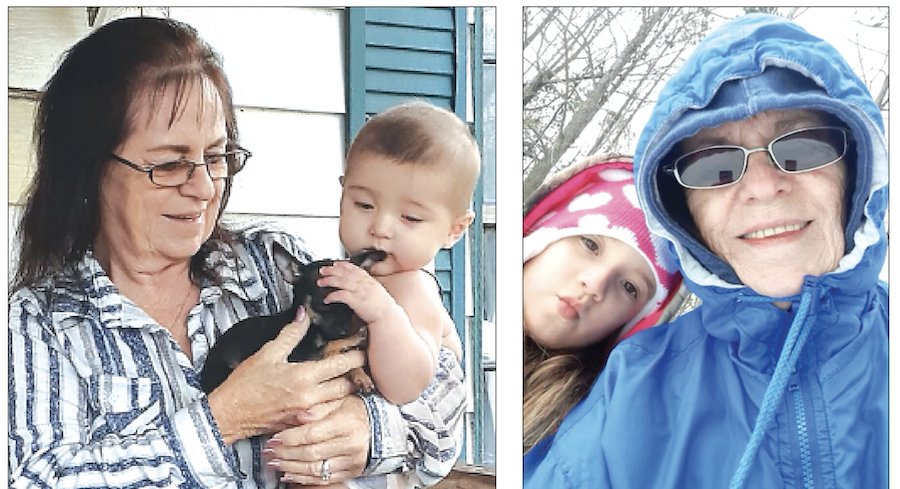 Left: Phyllis McBride of Dry Creek is on the scene as great grandson Jody Shaver is introduced to a new puppy. Right: McBride and great-granddaughter Paisley Shaver make the most of a snow day. (Special to the American Press)

If you ask 73 year-old Phyllis McBride of Dry Creek what the happiest day of her life has been so far, it may take her a moment to give you one firm answer.

The love for her husband and three children is evident in her words and the photos in her home, but when she speaks of her grandchildren and her great grandchildren, a special glow takes hold of her eyes. It becomes clear that the day she held each child holds a special place in her heart all to their own, but the day she transitioned to “grandmother” opened a new world of emotions.

“There’s nothing else like it. There is no way to describe it; the love you feel. I think I was born to be a grandmother,” she says with a warm grin and soft voice.

Indeed, much of the east Beauregard Parish community lovingly refers to McBride as “Nana,” and she said she wouldn’t have it any other way.

McBride is the proud grandmother of seven, and the adoring great grandmother to four, but tragedy forced her to revisit the parenting world when her oldest granddaughter was a teenager.

McBride’s only daughter and youngest child passed away at the age of 34 from brain cancer. She left behind two children, the youngest age three and the oldest 14. Circumstances at the time meant McBride would become the sole guardian of her teenage granddaughter.

The fantasy of her husband and herself enjoying retirement by traveling around the U.S. as empty nesters changed, and their empty halls suddenly became filled with teenage friends and echoed the battles of teen angst the two had almost completely forgotten about.

“It was different. I had to play two parts then: mother and grandmother. I could be loving and sweet, but I had to draw a line in there somewhere when I had to become strict and enforce rules,” McBride stated.

McBride’s love and skills as a parent were clearly powerful. The granddaughter she raised now lives just a few feet away on property next door. McBride’s reward for her love and devotion comes in the form of three grandchildren that she sees every day, and enjoys beautiful moments with as she puts them on the school bus each morning.

“I would say that is almost my favorite part of the day. I bring them close to me as we sit in my car and I say a prayer with them and tell them I love them before they go off to start their day at school. I love sharing those moments with them,” she stated.

When reflecting on her years as a parent and grandparent, McBride acknowledges the difference in her patience and the lessons she learned along the way. The issues that may have seemed like a problem as a parent, she said, become insignificant with the hindsight and wisdom one possesses as a grandparent.

“As a parent, bless it, you’re just learning as you go through life learning with them. But as a grandparent, you have perfected it and you realize that spilled milk can be cleaned up pretty easily,” she stated.

Grandparents to four, the couple have experienced the joys and stresses that come with the new world of grandparenting and the past year in Southwest Louisiana offered no relief in that regard.

Linda Russell recalled having to be separated from her daughter, Brandy Russell and their two grandsons at the beginning of the pandemic and how hard it was not seeing their grandchildren.

“That was incredibly stressful and heartbreaking. It was all new and we didn’t know what to do, so we had to keep away for a while to protect each other. The thought of bringing home something to them and making them sick was too scary for us,” Russell stated.

“I think we went through some serious withdrawals not being able to see them every day,” she joked.

The family was at last able to be together again, just in time for Hurricanes Laura and Delta. While Russell said she and her husband stayed for Hurricane Laura, the couple chose to evacuate with their daughter and grandchildren for Delta.

“We were in a hotel for about 10 days, and it actually provided us with the opportunity for a fun bonding experience throughout the ordeal. It was just a relief being together and knowing they were safe,” Russell stated.

Russell said that in addition to the incredible love their grandchildren have brought to their lives, it has also brought them closer to their daughter.

She said the family spends more time together now than they did when their daughter was growing up, and that the couple enjoys knowing they are always the first phone call she makes when she needs help.

“Grandchildren just make everything better. The love you feel for a grandchild is unimaginable, and it has allowed our whole family to become closer. It’s a special feeling knowing that you are the first person your child calls when they need help, no matter what age they are,” Russell said.