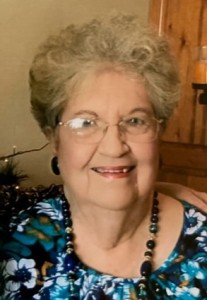 On December 26, 1934, God gave Dorothy LeDoux Anderson her earthly life, and on July 30, 2021, God took her to her heavenly home after 86 years.  She was a native of Sulphur for 75 years and later resident of Pensacola, Florida.  She passed away peacefully at her daughter’s home surrounded by her family. Dorothy loved to work in her yard and loved decorating her home with many silk flowers and holiday decorations.  After moving to Pensacola, she loved socializing and playing bingo at the Senior Center.    She was most proud of her children, grandchildren and great-grandchildren.  Dorothy is survived by her two daughters, Terry and spouse Roger Dyer of Baton Rouge and Cindy and spouse Sonny Rawson of Pensacola, Florida. She is also survived by two brothers, Kenneth Ledoux and Alton LeDoux and a sister in law, Frankie Lanzalaco, all of Sulphur.  Dorothy had five grandchildren, Evan Dyer (Brittany), Rachel Breaux (Derek), Erica Rawson, Abigail Work (Chris) and Julianne Rawson.  She also had seven great grandchildren, Laurel, Aubrey, Brooklyn, Avery, Reed, Clementine and Louis.

She is preceded in death by her husband Charles F. Anderson Jr. and parents, Lucien and Lydia LeDoux as well as her brothers Alvin (Buddy) LeDoux and Edward Lee LeDoux.

Services will be held on August 28 at Johnson Robison Funeral Home in Sulphur.  Visitation will be from 1-3 p.m. with a memorial service at 3 p.m. followed by burial at Big Woods Cemetery in Edgerly.  In lieu of flowers, donations can be made to Care Help of Sulphur.