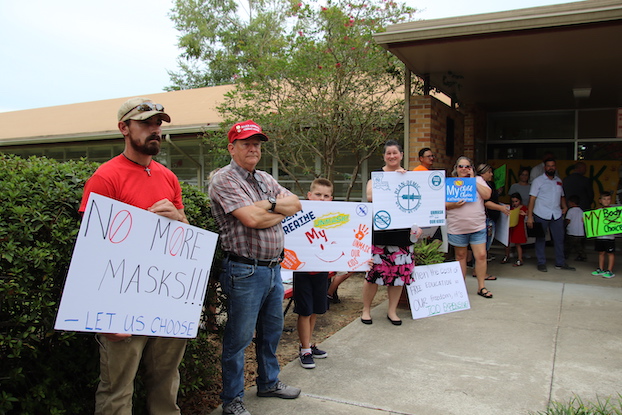 Students and parents held a peaceful protest Thursday before appearing before a meeting of the Jeff Davis Parish School Board at Welsh Elementary School. The group urged the School Board to make masks optional and allow parents to sign medical waivers without a doctor. The School Board did not take any action on the requests. (Doris Maricle / American Press)

WELSH — More than 100 parents and students appeared before the Jeff Davis Parish School Board on Thursday to voice frustration for the district’s continued support of masks for students nearly a week after schools reopened to face-to-face learning.

“We aren’t asking for any new rules to be made for us or for masks to be abolished, but we are asking that you honor the Constitution and our rights given to us by our creator and asking you for parent’s choice,” said Summer Lejeune. “We are issuing a call of action for this board to help us stand up for our children and retain the freedom to choose for ourselves and our kids. It’s the least we the people can do for our children’s future and the future of America.”

Lejeune, the mother of two young students, was among nearly two dozen parents and students who addressed the School Board for nearly two hours in an effort to unmask students. Many of those attending also called for the School Board to allow parents, not doctors, to sign medical waivers.

Parent Jacquie Bulla contends the law allows the School Board to take someone at their word that they are exempt with no further explanation or doctor’s signature.

“If you require a doctor’s signature that would be your policy and not the governor’s,” Bulla said. “And I think we’d all be very interested to know who would impose even more restrictive measures on us and our family than the governor already has. If the virus spread really concerns you why not vote instead to reimplement temperature checks so we can keep actually sick kids out of school instead of covering the faces of our healthy ones.”

Mary Williamson, said parents have a constitutional right to make medical and religious decisions for their children and asked the board to uphold exemptions given without a doctor’s excuse.”

The School Board took no action on the group’s request.

Louisiana School Attorneys Association Jon Guice said the School Board cannot override or supersede the governor’s proclamation. In addition he said the state Board of Elementary and Secondary Education guidance requires a medical reason and a medical exemption to be signed by a doctor

“There’s 64 parishes in this state, don’t you think of all the people that want to help their constituents that one School Board would have done something if they could have,” Guice said. “These folks don’t have the authority to do what you are asking them to do.”

He said Jeff Davis Parish is the only parish that allows students to stay in school without masks.

Students who attend school without a mask are being isolated from other students which has led to some parents removing their students from public school.

Bhreten Chaisson, an eighth grader, said he and his sister are among students being segregated from other students because they refuse to wear a mask. Chaisson said he wore the mask last year because he wanted to be educated, but the mask caused him to be depressed because he could not communicate with other students and barely recognized his own friends who were hidden behind the mask.

“Let us choose what we want to wear,” Chaisson said.

“I urge you to rethink what is going on, not just here but in our world today,” said Jeremiah Boudreaux, the father of two children. “It is not in the best interests of children to put a mask on their face for multiple hours a day while being taught, as well as our teachers.”

Boudreaux asked the board to reconsider their decision and to stand for what is right and make a change for future generations by putting an end to masks. He said both of his children are being segregated everyday for not wearing a mask at school. They are the only two out of over 600 students who do not wear a mask, he said.

Michelle Bonin, grandmother of 12 children, said masks make no sense and will make no difference.

“Last year we jumped through all the hoops and people still got sick and died,” she said. “Masking up kids is not the answer. Choice is the answer because this is America….Why are we punishing those who choose not to wear masks? What good is a mask doing in society except splitting us apart.”

Brennan Freedland, who has an eighth grade son, said masks and vaccines are not enough to protect people. He said masks are nothing more than a false sense of security.

“Why are you forcing children to cover their faces for reasons they do not fully understand,” Cody Canerday said.

“I want my kids to breathe,” said Suzette Mallett, the mother of six children. “If you believe in the masks, wear it by all means. I don’t care, but we want to breathe and we want it to be optional. I promise you half of the staff, much less children will be unmasked.

“I implore you to fight this battle as our elected representatives for the good and protection of our children,” said Julie Richard. “Your part is to fully reinstate the freedom of our choice for the children and parents of our parish…..Let our children and parents know that you continue to uphold their best interest and the rights bestowed upon them by God and our great Constitution.”

“I am upset about how our children are being forced to wear masks in order for them to receive an education,” said Amy Hoffpauir, the mother of two. “Masks do not work for children. They are in school for over seven hours each day, wearing them, touching them and pulling them down. As soon as someone touches something outside of the mask they are contaminated.”

Jeremy Lege is concerned about the impact masks will have on children. He said the mandatory mask mandate imposes risk on children’s mental and emotional health by hindering his verbal and non-verbal communication with classmates and teachers for up to seven hours a day.

“I do not comply with my son being forced to wear a surgical device on his face because of health reasons and religion freedoms which are protected by the Constitution of the United States of America.”

The Rev. Clifton Lejeune said masks do not protect children from the virus and cited many studies which he said have proven that masks can’t help mitigate the spread of COVID-19. He presented each School Board member with a binder of several hundreds of pages of information and studies concerning the dangers of masks, how they do not prevent the spread of virus and how they reduce the oxygen intake.

“They are detrimental to the psychological and mental development, to the neurological development as well as the educational process,” Lejeune said. “It is impossible  to teach children when they can’t breathe.” 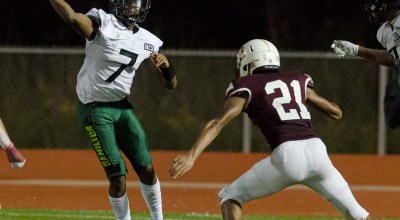 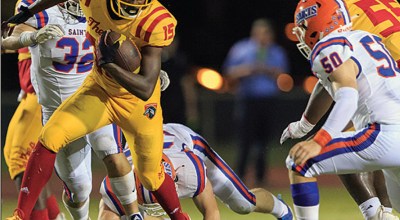