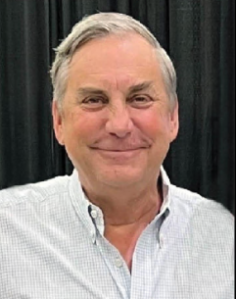 William David McCoy was born April 12, 1962, in Japan, to William Warren McCoy and Mary Katherine Lohmeyer. Following nine months of fighting and believing he could beat it, David peacefully succumbed to cancer on Jan. 22, 2023, in Lake Charles, La.
After spending his first years in Japan, his family returned to Missouri, where he graduated from high school and spent two years in the Army. This was followed by farrier school and a short stint as a farrier trainee. David quickly realized that shoeing horses was not for him. Never being one to over analyze a situation before acting, when Sug Utz, a renown Missouri Saddlebred trainer, expressed a need for a groom, David immediately quit the shoeing job and went to work for Sug. Before too long, the suburbanite, with limited riding experience, was thrown onto the backs of whatever Sug gave him to work. David honed his craft working later for Dale Pugh and Art and Jimmy Simmons. While in Missouri, David also opened his own stables. When the job opportunity to work for Martha and Milt Aitkens at the Long Gray Line Farm in Huntsville, Alabama became available, David jumped at the task. He spent the summer of 1993 showing Long Gray Line horses on the Kentucky County Fair circuit. That summer he met the Aitken’s friend Beth Hollins and shortly thereafter, he arrived at her home in Lake Charles and they married three months later. David McCoy trained Saddlebred horses in the Lake Charles area for twenty-nine years.
David was a member of the Odis E. Green Lodge, a 32 degree Scottish Rite Mason, a York Rite Mason and an operative mason. He was also a member of the Habibi Shrine Temple. He treasured these organizations and the people within them and counted them as true friends. Dave could talk to anyone and it was often said he could carry on a conversation with a stump. One never wanted to get into a history debate with him as he knew the smallest minutia of historical events. He was a voracious reader, which fueled his knowledge of things far and wide.
David was predeceased by his father, William Warren McCoy and his brother, James McCoy.
He is survived by his wife, Elizabeth (Beth) Hollins; mother, Mary Katherine McCoy of Booneville, Mo.; sister, Mary Claire Straub of Kansas City, Mo.; step-son, Guerry Hood and wife Stacey of Houston, Texas; his pride and joy, his granddaughter, Olive Elizabeth Hood of Houston, Texas; sister-in-law, Paula Schoen and her husband Robert of Baton Rouge, La.; and nieces and nephews.
His funeral service, beginning with the Masonic Rites will be at 1 p.m. on Friday, Jan. 27, 2023, at the Episcopal Church of the Good Shepherd. The Rev. Dr. Mitzi George and the Rev. Frances ‘Boo’ Kay will officiate. Burial will follow in Orange Grove Cemetery, under the direction of Johnson Funeral Home. A gathering of friends and family will begin on Friday at the church from 12 p.m. until the start of the service.
Donations to honor Dave can be made to the Shriners Hospital for Children, P.O. Box 1525, Ranson, WV 25438, Saddlebred Legacy at www.saddlebrd legacy.org or the Episcopal Church of the Good Shepherd, Lake Charles, La.
Words of comfort to the family may be expressed at www.johnsonfuneralhome.net.