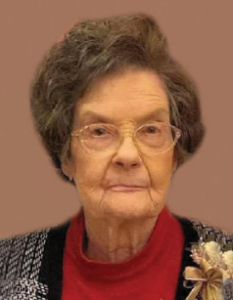 On Wednesday, Jan. 18, 2023, Peggy Marie Taylor Cranford passed away at the age of 88, in Alexandria, La. She was the proud mother of four children as well as Meme to six grandchildren and two great grandchildren. Peggy was also considered a second mother to many of her children’s friends and a bonus Meme to their children.
Peggy was born in Mansfield, La., Dec. 15, 1934, to Robert Eustace Taylor and Annie Mae James Taylor. She graduated from Mansfield High School where she played varsity basketball. Peggy married Joe Bob Cranford on Feb. 1, 1953.
Peggy and Joe raised their children in Sulphur. She was an excellent caregiver to her special needs daughter, Brenda, as well as many others. In 1984 Peggy joined her husband in the operation of West Calcasieu Printers until the time of their retirement in 2000. The couple enjoyed several years of travel around the country until Joe’s health began to deteriorate. Peggy enjoyed cooking and baking for friends and family. She was known for her delicious chicken salad and famous oatmeal cookies.
Peggy loved the Lord and was a faithful member of First Baptist Church and Grace Baptist Church. She enjoyed attending Calvary Baptist Church when she moved to Alexandria in 2019. Peggy spent many hours studying the Bible and was a prayer warrior for all, often giving wise advice to her family and friends.
She had a heart for missions and was a generous giver. She and Joe supported several missionaries throughout the years. She was often heard to say, “Well, the Lord is just going to have to take care of that,” and “You can’t outgive the Lord.” One of her favorite verses was 3 John 1:4, “I have no greater joy than to hear that my children walk in truth.”
Peggy is preceded in death by her parents; her husband of 57 years; her daughter, Brenda; a brother, Gene Taylor; her sister and brother-in-law, Dorothy and Charles Dill; a very special aunt, DeVelle Parker and many dear friends. What a reunion it is!
Those left to cherish her memory are her son and his wife, Wayne and Carol Cranford; daughters, Dr. BJ Cranford; Rhonda Broussard and her husband, Kevin; grandchildren, Jake Cranford and wife, Casey; Callie Cranford; Cole Cranford and fiancée, Caroline Lynch; Maggie Broussard; Anna Broussard Johnson and husband, Larry; Aaron Broussard and wife, Alexa. Great-grandchildren are Eden Grace Johnson and Campbell Jordan Cranford with another little Cranford on the way. Others include her brother, Richard Taylor and his wife, Debbie; two special nieces, Debra Dill Brown and Sherri Dill-Jones; as well as extended family and friends.
Many thanks to Brooke Jones Vincent and Sherri Dill-Jones for providing respite care for the family. The staffs and administrations at Regency House Assisted Living and Naomi Heights Nursing and Rehabilitation provided wonderful homes for Peggy.
Great appreciation also goes out to the administration, doctors, ED and 6th floor staff at Christus St. Francis Cabrini Hospital. Their compassion will not be forgotten by the family. Reginah and Shae are angels on earth.
Guardian Hospice Care made Peggy’s last few days easier for the family. We are grateful to the staff and administration for their gentle guidance and great empathy.
A graveside service will be held at the cemetery at Old Union Baptist Church, 664 Old Union Road, Converse, La., on Saturday, Jan. 28, 2023, at 2 p.m. officiated by her grandson-in-law, the Rev. Larry Johnson. The service will be under the direction of Hixson Brothers Funeral Homes of Alexandria, La.
In lieu of flowers please consider a donation to KCAcademy, a school for atypical learners, and dear to Peggy’s heart. KCAcademy 2516 Riley Street, Sulphur, LA 70665.
To extend online condolences to the Cranford family please visit us at www.hixsonbrothers.com.