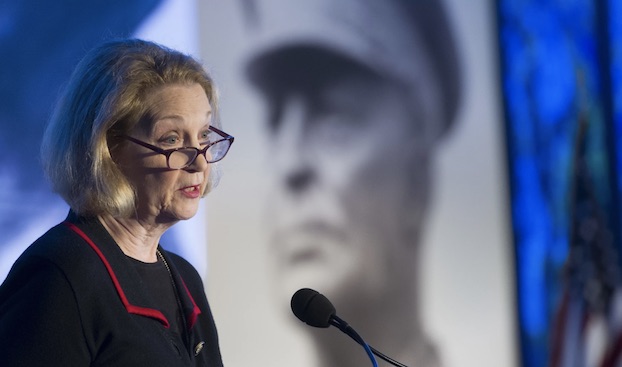 The import and export of energy, especially as it relates to the current worldwide state of affairs, was the main topic at the 119th Chamber SWLA Banquet on Thursday.

Her work has resulted in many trips to Russia, Ukraine, Central Asia, and the Baltic Republics. This travel, combined with her professional background in nuclear energy and arms control, has led her to develop an expert analysis of current international affairs. “You can imagine that my work at the moment has become front and center for many of the developments,” she said.

She offered a “slightly unusual take.”

“We’re in a period of enormous change, and I wanted to offer a few thoughts about the big world that seems to be coming unglued on some days; the interconnections between what it is you do here and what goes on in places like Russia and Ukraine and in other parts of the world.”

Since the pandemic “everything from supply chains to the individual and the ability to really feel comfortable again in the workplace,” has changed. These changes are not limited to the United States.

Eisenhower referenced the many “destabilizing events” that have occurred in recent history, such as “the United States’ departure from Afghanistan and, probably even more politically important, the war between Russia and Ukraine.”

There are five interconnected wars at play, according to Eisenhower. The first of these wars is the Civil War in Ukraine. Currently, Ukraine is at odds regarding the decision to centralize or federalize the government. She described it as “whether they have a governance system that acknowledges the difference between the east and the west side of that country.”

“They are areas that are culturally different and have a different view of their own specific routes.”

The second war is the Russian-Ukrainian war. She attributed the origin of the war between Russia and Ukraine to “global decisions that occurred after the collapse of the Soviet Union.”

“What we didn’t realize then is that many of the choices that were made were unsustainable,” she explained. “So today, regional war has turned into a multi-front confrontation.”

The primary concerns of the Russian-Ukrainian war are security issues, and the debate over Ukraine’s neutrality. “Russia would like Ukraine to be neutral from a military security point of view,” said Eisenhower. “Ukraine would like to join the West.”

This conflict brings about the third war; Russia versus NATO. She stated that this war is being fought over NATO’s “alleged right to interfere in the other two wars.

The United State’s involvement in the Russian-Ukrainian conflict has created the fourth war. “This war is over the United States helping Ukraine, as well as U.S. expectations that the world must follow a U.S. based international system.”

She continued by explaining that this tension has created “enormous conflict,” especially considering Russia and China’s preference for a “multipolar world.”

This all leads to the final and most global war: the energy war.

“The energy war is about this essential commodity… whoever has it will be dominant; and the war, including sanctions related to energy, has been existing long before Russia and Ukraine opened fire on one another.”

The danger of escalation, in regards to arms control, is Eisenhower’s greatest fear. The United States’ efforts to subdue Russia have not been efficient, she said, stating, “many of the tools that the United States has used to stop the Russians have thus far not been successful.

She particularly referenced sanctions, explaining that Russia has “found a way to work around the sanctions.”

“It’s shocking how well their economy is currently doing.” She referenced the new trade lines that are opening between Russia, Africa, Latin America and Asia. Additionally, Moscow’s discounts on the cost of a barrel of oil has made India one of the largest importers of Russian Oil. Last fall, Turkey doubled its fossil fuel imports from Russia.

She explained Russia is succeeding in the worldwide market by  establishing shell companies, blending their fuels, reflagging their vessels and “making deals with countries that did not support, in the United Nations, the condemnation of the Russian Federation.”

In regards to the nuclear field, uranium has not been sanctioned by the United States and allies, as “we have no uranium supplies in our country that are processed domestically.” She stated that we are dependent on Canada, Australia and “most importantly” Russia for uranium. It is vital for the United States to have uranium, she said, because we are dependent on the resource for nuclear power plants and the U.S. nuclear arsenal.

Eisenhower presented a grim, but realistic, first-hand outlook. “I don’t mean to be gloomy about this, but I’ve made close to 100 trips to what is today the former Soviet Union, and I don’t see how this is going to come to an end,” she admitted. “I think that if we are lucky enough to find an agreement or a ceasefire, that we’re still going to have to address… the issues related to the other four wars, because all of them are interconnected.”

She concluded with her belief that reaching pre-pandemic stability is out of sight. “I don’t see any immediate potential to return to the kind of stability that we had before the pandemic… we are actually today in another world.”

Despite her evaluations and conclusions, Eisenhower aims to have a hopeful outlook. “We all remain concerned about inflation and the potential of another terrorist attack… but nobody can get through life thinking about the downside. I was taught to be optimistic,” she said. “It mobilizes people… there is no better time than now to prepare for the upsides and the downsides of events stemming from our global interconnections.”