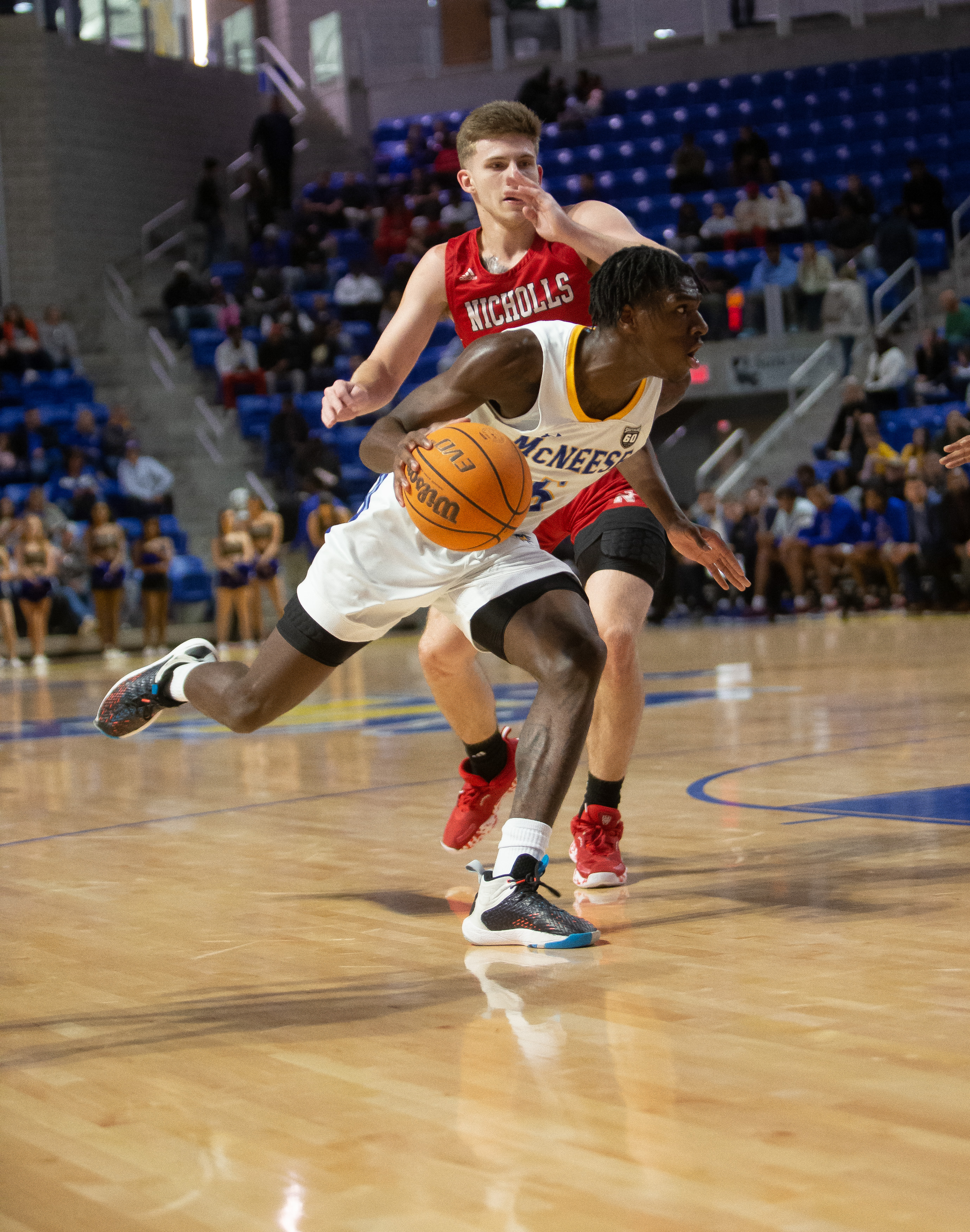 Unable to stop their slide, the Cowboys’ season is streaking away from them.

McNeese State lost for a season-high fifth straight time Saturday and a Southland Conference race that started with a pair of wins is quickly spiraling downward.

For the seventh straight time, and twice in three days, Nicholls took out McNeese, sending the Cowboys ever closer to the league basement.

The Colonels used a late surge to topple the Pokes 71-68 before 2,337 inside the Legacy Center.

The loss dropped McNeese to 2-5 in the conference and 5-15 overall. It was also the Cowboys third straight defeat on Joe Dumars Court.

The fact the Cowboys are in so many games and still losing only adds to the frustration.

“I hate it for our guys,” said McNeese head coach John Aiken. “I like how we battled. I just wish we could finish it off.”

The end was the issue Saturday. After Caleb Huffman hit a running floater with 10.4 seconds remaining to give the Colonels a 68-66 lead, the Cowboys had their chance.

“That was a huge shot,” Aiken said. “We guarded it as well as we could. We made him go left you just have to give him credit.”

Down two Aiken elected not to call a time out.

“I didn’t want to let them set their defense,” he said.

Johnathan Massie’s drive ended with the ball rolling out of bounds and back to the Cowboys. But after a timeout McNeese’s Trae English couldn’t inbound and was called for a five-second violation, the Pokes second such turnover of the game.

“I thought that was a quick five count,” said Aiken.

After a free throw, McNeese had one last chance when English was intentionally fouled. He was supposed to make the first of the 1-and-1 and miss the second with just over two seconds remaining.

“We had a missed free throw play set up,” said Aiken.

However, English missed the first and the Cowboys’ hopes were over.

“We are close,” said Aiken. “That is a good team we played.”

Huffman was the difference as he scored 12 of the Colonels final 15 points in the last 8:11.

“Caleb Huffman made some huge baskets that were backbreakers,” Aiken said. “He was the difference maker.”

Huffman finished with a game-high 20 points while Latrell Jones added 18.

An 11-2 Cowboy run early in the second half got McNeese back in the game, and when Zach Scott followed a Christian Shumate jumper with a 3-pointer the Pokes were up 54-51 with 9:38 remaining. That’s when Huffman scored eight straight to put the Colonels back up and setting the stage for the close.

Nicholls scored the game’s first 11 points but McNeese responded and cut the lead to 34-32 on Harwin Francois jumper. However, the Colonels closed the half on a 6-0 run and lead 40-32 at the break.