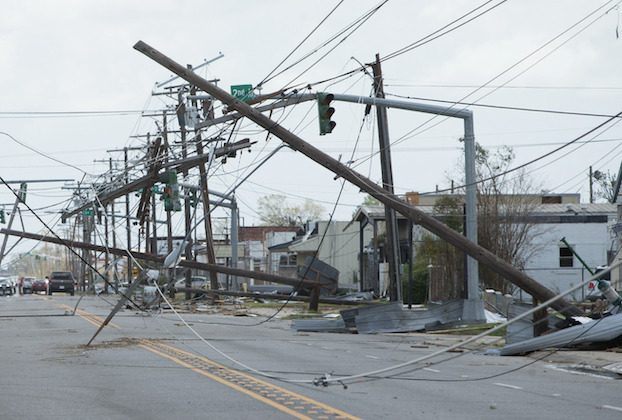 That was the question from more than one of the 60-plus attendees at the Tuesday meeting hosted by Calcasieu Parish Police Jurors Eddie Lewis, District 3 and Mike Smith, District 2. Lewis and Smith set the meeting for residents who still need home repairs — and answers — after applying for or attempting to apply for what they hoped would be available funding from the Restore Louisiana program to help them get homes and lives back on track after the 2020 hurricanes and May 2021 flooding.

“That didn’t happen until October when the grant agreement was signed,” she said. Later in her talk, Perkins said it was November.

She reiterated what previous Restore spokespeople have said. Restore Louisiana is bound by HUD’s criteria. Only the uninsured are eligible. In previous meetings, other criteria were explained: Restore is only for the owner who was living in the home at the time of the disaster. Damage from Laura, Delta or Ida had to be severe as determined by FEMA.

Even though FEMA and Restore are not the same program, benefits can’t be duplicated.

“It’s not that it (FEMA grant) technically needs to be repaid,” she said, “but monies given once cannot be given again. Let’s say your damages total $100,000. So, if FEMA were to give someone $20,000, when the Restore program comes in, they have to verify that the funds were spent for an eligible expense.”

Some homeowners, she said, might have decided homes were too damaged to use FEMA money on repairs.

“You are still required to show how those funds were spent,” she said. “When Restore does an inspection, they will see what has been completed and what still needs to be completed.”

In case of contractor fraud, FEMA monies were received but the contractor did shoddy work or never showed, a police report would need to be filed.

For those who qualify for Restore, but have used their own money and the last almost 28 months to get back into their houses, it’s important to fill out the Restore Louisiana survey, the first step to determine eligibility before application can be made.

“The state is fighting for a reimbursement component,” Perkins said. It’s also possible that the underinsured could be considered.

The restore.la.gov website is thorough. For those who can’t complete a survey online, it is possible to apply at the Magnolia Building in Lake Charles on Mondays, Wednesdays and Thursdays, according to Perkins. Funds are also available for homeowners who had damages after the May flooding.