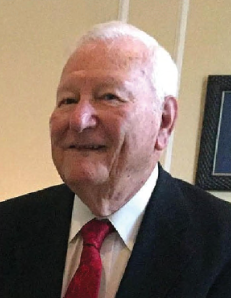 Gayle Norman Davis, of Lake Charles, LA., passed away on Dec. 3, 2022 at the age of 88.
Gayle was born on March 12, 1934 in Hooven, Ohio. His family moved to Maplewood, La., where he graduated from Sulphur High School in 1954. Upon graduation, he enlisted in the United States Army. After his honorable discharge from the Army, Gayle enrolled at McNeese State University. Gayle graduated in the first engineering class at McNeese, where he was one of six graduates. Gayle worked at Dresser Atlas as an engineer, manager and salesman. Gayle retired after 25 years with Dresser Atlas, at 52 years old.
Gayle was active in the Society of Petroleum Engineers and the American Petroleum Institute, serving on the Board of Directors for both organizations.
Gayle was an active member of First United Methodist Church. He was a member of the Open Door Sunday School Class, and he enjoyed the friendships made while volunteering at Abraham’s Tent. Gayle loved watching Monday Night Football at the church, AKA, steak night.
Gayle was an accomplished engineer. He loved all thing technical from computers to precision woodwork. Gayle also loved to travel, and recently spoke about his second baptism in Israel.
Those left to cherish his memory are his wife of 61 years, Becky Davis; his son, Stewart Davis; his daughter, Susan Colvin (Doug); his grandchildren, Kim Lyon (Bud), Nicholas Colvin (Loren), and Kassidy Colvin; his four great-grandchildren, Dominic, Kooper, Bronson, and Pierce Davis; and his sister-in-law, Janice Fruge. Gayle was preceded in death by his parents, Willie and Elsie Davis; and his wife’s parents, Jessie and Elsie Stewart.
Funeral services will be held at the First United Methodist Church, in the worship center on Dec. 10, 2022. Visitation is from 9 a.m. to 11 a.m., and the service is at 11 a.m. Inurnment will follow the service at the chapel.
In lieu of flowers, donations may be made to First United Methodist Children and Youth Ministries, or a charity of one’s choice.
Words of comfort to the family may be expressed at www.johnsonfuneralhome.net.