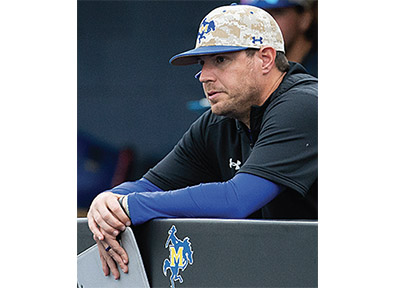 Winter may still be a few days away, but the McNeese State baseball team is already thinking about the spring.

On Tuesday, the defending Southland Conference regular-season champions released the nonconference portion of their schedule.

With a good part of their offense returning, McNeese is hoping to make another run in the postseason. The SLC Tournament will be in Lake Charles as the Cowboys look to earn a third trip to the NCAA playoffs in the last four campaigns.

The 2020 postseason was canceled due to COVID.

“This is an exciting schedule for us,” said McNeese head coach Justin Hill. “We are always looking for balance and I think we got some of that.”

The Cowboys have two open dates and are forced to play both Nicholls State and Houston Christian in non-league weekday affairs to round out their schedule, Hill said. That’s because of the late addition to the conference by Lamar’s return and Incarnate Word’s decision to stay.

Still, after a couple of strange seasons, this is more back to normal.

“Even normal feels weird now,” Hill said. “We were able to schedule those games against Nicholls and Houston Christian for weekdays after we play them in league, which is good.”

McNeese will open the season at home against Creighton with a three-game set starting on Feb. 17. The Blue Jays are back in town after taking part in the 2019 Lake Area Classic.

“The fact that they have come down here before and want to come back says they enjoyed their trip,” Hill said.

Prairie View A&M will be at Joe Miller Ballpark again March 10-12 while the Cowboys will travel to Texas-Arlington, Feb. 24-26.

McNeese will also be at Sam Houston State on Feb. 21 while playing at Louisiana-Lafayette on Feb. 28 while hosting the Ragin’ Cajuns on March 8.

The Cowboys will also play at Southern University in Baton Rouge on March 1 with the Jaguars making a return trip on March 28.

The Cowboys will visit Rice on April 12 and LSU on May 16. They will also have home series against Nicholls, Texas A&M-Corpus Christi, New Orleans and Lamar.

“I like that we have weekday games that are close to home,” Hill said. “I think this is a pretty well balanced schedule.”