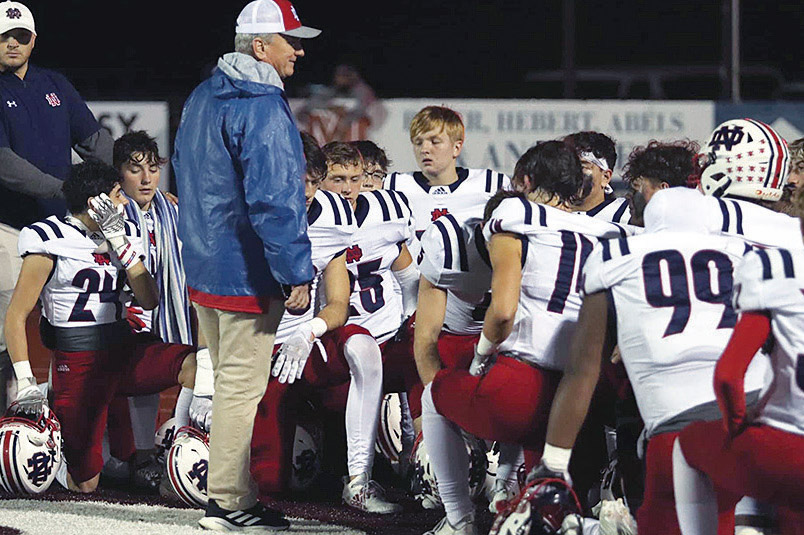 Dennis Dunn has created success wherever he’s coached, turning North DeSoto into a championship contender since taking over in 2019. (Madison Ruston / Special to the American Press)

He won four district championships in five years at Woodlawn-Shreveport. From 1992 to 2005, he turned Evangel Christian into a national power, winning nine state championships. Then it was on to Louisiana Christian University where he led the Wildcats for 11 seasons and 65 wins, including seven consecutive winning seasons and their first since 1961.

After a brief two-year stop at Pineville, Dunn landed at North DeSoto. The Griffins went 4-6 in his first season in 2019. But with his first group of four-year seniors, the Griffins are 11-1 and in the semifinals for the first time in program history.

“I think you have seniors that were here from day one when I first got here,” Dunn said. “You have a class that has bought into the culture and thought process of ways things need to be done.

“I don’t think these kids will realize what has happened until maybe a few years down the road,” Dunn said. “It has really brought the community together. The whole community is just engaged in what is going on. It has been a beautiful thing to watch.”

The Griffins prefer a power run game led by a pair of 1,000-yard backs in John Lewis and Brian Banks, but they can air it out too. Freshman quarterback Luke Delafield has thrown for 2,116 yards and 34 touchdowns.

“We have had success taking advantage of whatever the opponent has given us,” Dunn said. “If we have a light box, we run it. If it is a heavy box, there are some things we like in the passing game.

“I think that is what most people try to do, take what the defense gives us. Our approach has helped us because we are able to do both pretty adequately.”