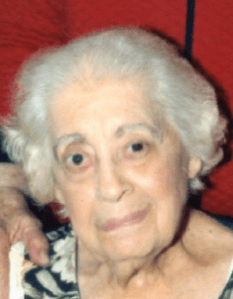 Helen Martha Henry entered peacefully into rest on Sunday, Nov. 27, 2022, at the age of 101 years, in her home in DeRidder. Helen was born on Sunday, Oct. 10, 1920, in Kirbyville, Texas, to Joseph S. and Josephine Acey Henry.
Visitation will be on Thursday, Dec. 1, 2022, from 6 p.m. until 8 p.m. at Labby Memorial Funeral Home in DeRidder, La., with a rosary to start at 7 p.m. A Mass of Christian Burial will be held on Friday, Dec. 2, 2022, at 10 a.m. at St. Joseph’s Catholic Church in DeRidder with Father Wayne LeBleu, pastor, officiating. Interment will follow at Beauregard Cemetery in DeRidder, La. Funeral arrangements have been entrusted to the care of Labby Memorial Funeral Home of DeRidder.
Helen Henry was a long time resident of DeRidder, La. She was born in Kirbyville Texas, to Joseph and Josephine Henry. Helen was one of four children. She was the oldest of the four. When she was around the age of 9 her family left Kirbyville and moved to DeRidder, La. Her father used to peddle fruits and vegetables for a living. They were a very poor family. A friend of her family gave her mom some fruits to sell on a street corner, after that her father started a very small grocery store on the corner in 1931. Helen grew up working in that store until her father retired.
Helen opened her Grocery store (Henrys Grocery) at a new location in DeRidder. Henrys Grocery was very popular when it came to her meat market. The public loved how she used to cut meat. It was the old-style meat market that would cut meat to order. She also used to deliver groceries to her customers.
She used to run her business on credit. People would come in and shop for their Meats and Groceries and she would put them on Credit. She never had a problem with her customers not paying their bill. They would pay as much as they could every month. She loved her customers and their families. Helen retired in 1984. She was a member of the St. Joseph’s Catholic Church since she moved here at 9 years old.
The family would like to thank Allegiance Home Health for helping to take care of our loved one.
Left to cherish her memory are her nephews, Evans “Joey” Touchet and husband Todd of Paige, Texas, John Touchet of San Antonio, Texas, Michael Touchet and wife Kristin of Porter, Texas, and Michael Henry of Lafayette, La.; nieces, Josie Henry of Rayne, La., Vickie Di Rado of Naples, Fla., Susan LeBlanc of Powder Springs, Gs., and Debra Henry of Hattiesburg, Miss.; special friends, Charlotte Burch, Jennie Sliman, Marie Gill, and Evelina Smith all of DeRidder; and a host of great nieces and nephews and great-great nieces and nephews.
Preceded in death by her parents, Joseph and Josephine Henry; brothers, Gene Henry and Edward Henry; sister, Marie H. Touchet.
Those honored to serve as pallbearers Joey Touchet, John Touchet, Michael Touchet, Joe Sliman, John Sliman, and Ovie Gill.
In lieu of flowers, the family is asking for donations to be sent to the Catholic Daughters Court of St. Barbara #2153 DeRidder of St. Joseph’s Catholic Church.
Words of comfort to the family may be shared at www.labbymemorial.com.