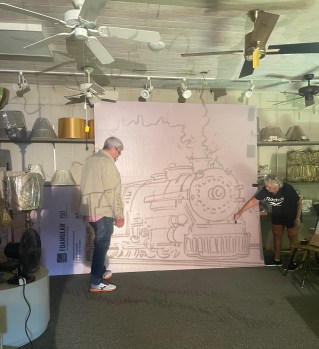 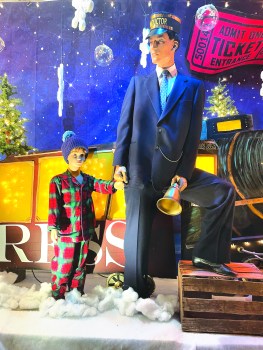 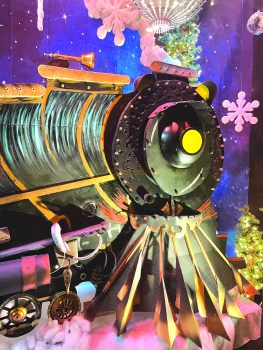 It’s beginning to look a lot like Christmas in Lake Charles.

The seasonal creations have been a family tradition now for 50 years, according to Randy Lanza, who oversees sales at the multi-generational, locally owned lighting showroom and electrical supply house.

“My dad kind of gave me carte blanche — I was very young — to do whatever I wanted,” Lanza said of the initial window designs. “I was really inspired by the windows at Muller’s. I was 16 or 17 at the time and come to think of it now, I did some really weird designs.”

Lanza said when he stopped designing windows, his younger brother picked up the baton.

Fast forward to 2022 and Brad Hoang, who is based in Oklahoma, has taken over as head designer of the displays. Walter Verkley and Gwen Guidry, both of Lafayette, assist with the design.

Lanza said Verkley constructed the train portion of the display.

“He’s very, very talented and he used stuff out of our warehouse for the details of it,” Lanza said. “There’s electrical supplies on the windows and a little bit of knick knacks everywhere. All of our displays are handmade and hand-painted; we buy very little merchandise.”

Lanza said the team has been working for months on the “Polar Express” design.

“We lost a lot of our props during Hurricane Laura so we’re starting from scratch,” Lanza said. “We lost probably about 95 percent of our stock. I’ll never forget after Hurricane Laura, the mess we had all over the showroom. We had a fall theme in our window and we had bales of hay in it. Something hit one of the windows during the storm and it blew hay 50 feet into our showroom. It took months to vacuum up all that hay out of the carpet.”

Lanza said hours of work go into each window. The installation of the “Polar Express” display began the first week of November.

“It’s a joint effort on everyone’s part, but this really big creation was Walter’s doing, his talent,” Lanza said. “We try to do a theme that people are familiar with and we try to keep it a little more traditional and it turned out fabulous.”

The trees are made of foam installation, the train windows light up and the parts that make up the train’s engine and wheels were salvaged from spare parts around the showroom.

“It’s all hand-painted and there are different textures on each piece,” Lanza said.

The display is a Christmas gift to the city.

“We love when people come by to see the window and we know of people who have made the trip from out of town for the holidays to see it,” he said. “Some come by a second time to see it at night.”

Lanza said window displays have become a lost art, and he’s proud to continue the tradition.

Previous themes have been winter white, a manger’s scene, the Grinch and gingerbread houses.

“New York stores don’t usually do big window displays anymore because of the expense and the design, and we’re so glad to have it here,” Lanza said. “It’s worth everything to us; we enjoy doing it and we want to continue to do it.”