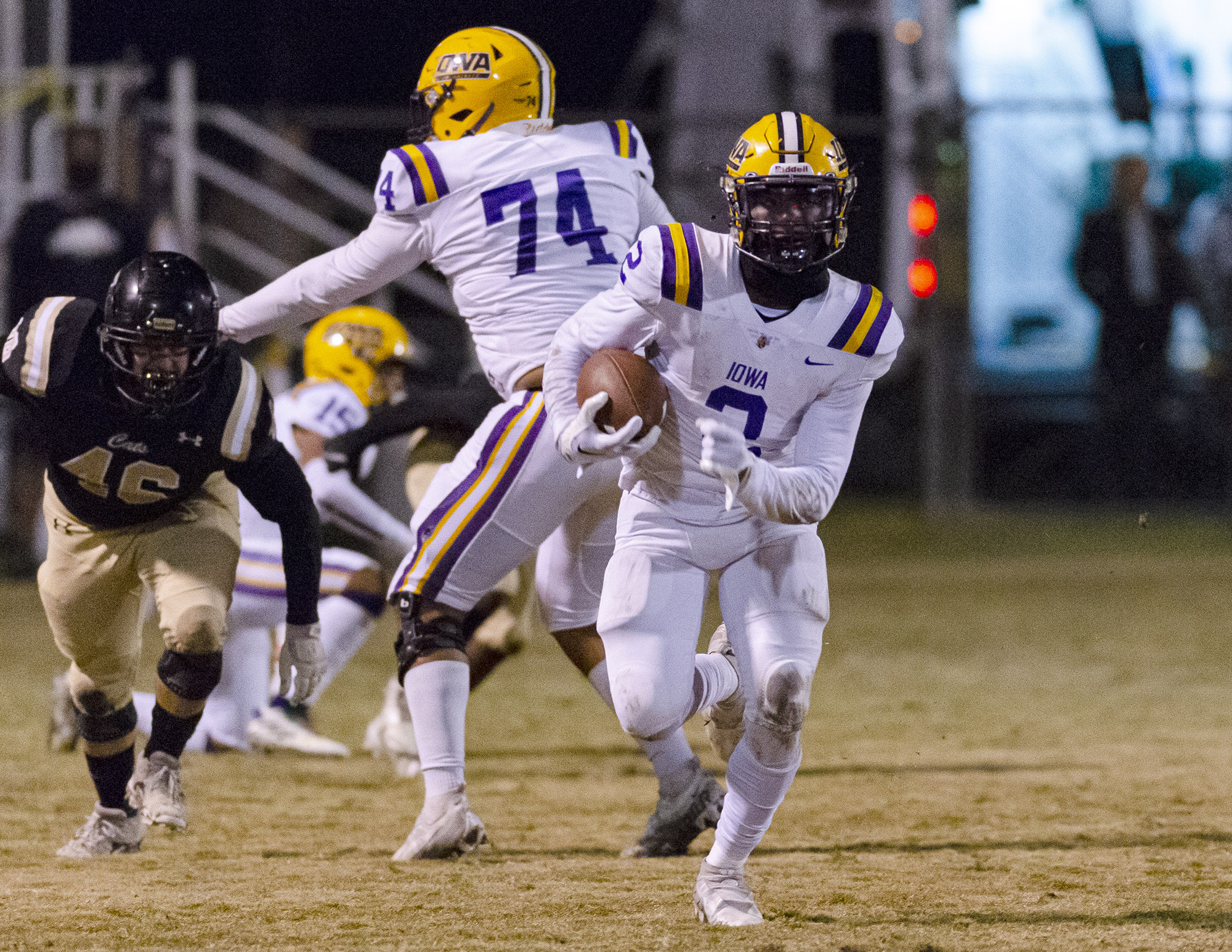 Iowa’s Ronald Young scores on an 80-yard run in the second quarter during a Division II quarterfinal game against the Wampus Cats Friday night in Leesville. (Rodrick Anderson / American Press)

LEESVILLE — No. 1 Iowa made history Friday night and avenged its lone loss.

Ronald Young led the Yellow Jackets’ punishing ground game, and the defense held the Wampus Cats in check in a 31-14 win to advance to the semifinals for the first time in program history.

“It is kind of hard to describe, to be honest,” Iowa head coach Tommy Johns said. “I couldn’t be more proud of the group. These guys continue to work, grind and find ways to win.

“These guys have been on both ends of the score. They have been through some down times, but they are the reason we are in the position that we are in. I just couldn’t be more proud of those guys.”

Iowa will host No. 4 North DeSoto in the non-select Division II semifinals next week. North DeSoto beat No. 28 Breaux Bridge 42-13.

Iowa (11-1) had lost in its three previous trips to the quarterfinals, all in the last decade.

Leesville was without 2,000-yard rusher Xavier Ford due to a concussion sustained in the regional round.

Young was held to a season-low 61 yards in that game. But running out of the wildcat most of the night Friday, he scored three times and ran for 278 yards on 27 carries.

“I felt good,” Young said. “I felt like we owed them one. We had to come back even harder than we did last time. We had to make some improvements on offense and defense.

“It feels good. I have never been there (semifinals) before and I want to see how it is and get the experience. I can’t wait. I get to hit the hole faster, and it is coming directly to me.”

“It is something that we kind of went to about three or four weeks ago,” Johns said of the formation. “Having Ronald back there and overloading and putting people like Damian Reed in the back as an H-back and letting those bigger guys lead in there, it gives people problems. Ronald is a load regardless of what you do.”

Despite being without Ford, the Wampus Cats stayed with Iowa in the first half. They cut Iowa’s lead to 14-7 on a 7-yard pass from Parker Maks to Izaiah Farley with 39 seconds left in the first half. But Iowa didn’t let them score again until the final 2 minutes of the game. Iowa held Leesville to 75 rushing yards.

“That was kind of the point of emphasis at halftime,” Johns said. “They let one in right there at the end of the half get away there.

“We had to buckle down, make a few adjustments and the kids executed those. I am very proud of those guys.”

Maks completed 15 of 34 passes for 214 yards and tossed two touchdowns to Farley, who finished with nine catches for 87 yards. Marshawn Graham added five catches for 111 yards.