SLC doles out awards, McMahon Offensive Player of the Year 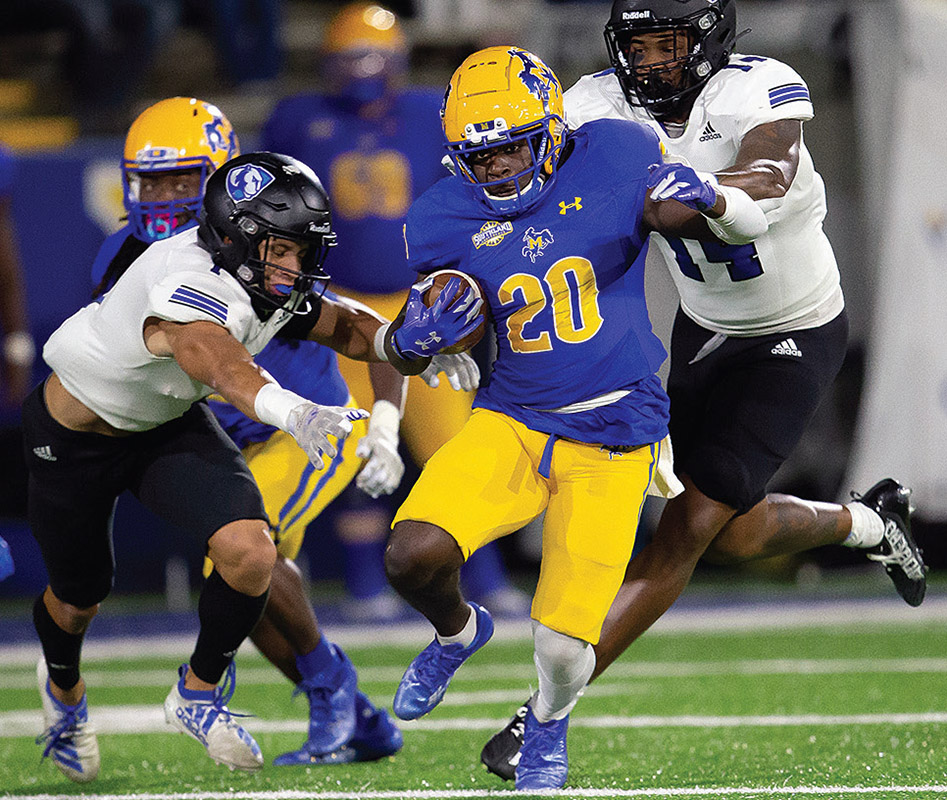 McNeese State running back Deonta McMahon, the Southland Conference rushing and all-purpose yards champion, was named the conference’s offensive player of the year on Wednesday.

UIW quarterback Lindsey Scott, one of 30 finalists for the Walter Payton Award as the top offensive player in the Football Championship Subdivision, was voted player of the year. Southeastern Louisiana’s Frank Scelfo was the coach of the year.

McMahon rushed for 1,408 yards for a 128 per game average, which ranked him fifth in the FCS. His 7.4 yards per carry average ranked fourth in the nation and No. 1 in the conference. He became the first Cowboy to win the league rushing title since 2008 (Toddrick Pendland) and first to win the all-purpose title since 2013 (Diontae Spencer).

He’s the sixth McNeese selection to be named the league’s offensive player of the year in school history and first since Cody Stroud in 2013.

The senior rushed for 100 yards or more seven times, including three consecutive games to end the season when he ran for 211, 197 and a career-high 239 yards.

He led the conference and ranked 20th in the nation with 12 rushing touchdowns, and with 14 total touchdowns scored, ranked No. 1 in the SLC and 14th nationally. In addition, he ranked second in the FCS (first in the SLC) with 171.8 all-purpose yards per game.

Barkat, a native of Sachse, Texas, was a preseason all-conference selection and played a major role in the success of McMahon and the Cowboys’ running game which led the conference with 200.5 yards per game. He started in all 11 game and ended his career making 29 consecutive starts.

Williams, a nominee for the Buck Buchanan Award as the top defensive player in the FCS, led the Cowboys and ranked second in the conference with 108 total tackles and a 10.8 tackles per game average. He ranked seventh in the league with nine tackles for loss while adding 2.5 sacks, a pass break-up and three quarterback hurries. He recorded 10 or more tackles six times with a high of 15 stops against Alcorn State and Southeastern Louisiana.

Mapieu appeared in all 11 games and recorded 27 tackles with 2.5 tackles for loss and a sack.

Smith connected on 10 of 11 field goal attempts and was 25-for-25 on extra-point kicks. He kicked a long field goal of 47 yards. His 10 field goals ranked second in the SLC while his 84 points also ranked second, tying him with McMahon. Twenty-seven of his 44 kickoffs went for touchbacks.

Coleman was an all-conference offensive lineman in 2021 and was a preseason selection this season. He missed the first five games due to concussion protocol but returned to start the final six.

In his first year and lone season as a Cowboy, Barnes led the Cowboys while tying for second in the conference with three interceptions. He recorded 52 tackles with four tackles for loss. He finished eighth in the league with seven pass break-ups and was ranked seventh with 10 passes defended. He also forced two fumbles.