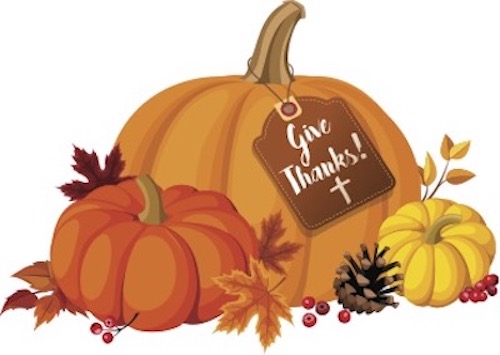 Two past Thanksgiving columns say it all about why the holiday is so important.MetroCreativeGraphics

Before the first doorbell rings and the table fills with food and family, before the stories of the year are shared, and before lazy afternoon naps take over despite best efforts to stay awake, I pause for my favorite moment of the holiday season. Thanksgiving makes the habit official: I thank God for the victories and the challenges thus far — the natural richness of another year of life lived.

As an American Indian, my favorite moments of Thanksgiving may sound familiar because the long-cherished tradition of pausing and counting blessings is a celebration of abundance that spans over four centuries of American history. It also opens the door to a busy holiday season — a time of giving and gratitude. And most Americans, including those identifying as intracultural, value Thanksgiving for its practice of reflection.

Still, many Americans are heading into this year’s season of plenty, feeling the economic realities of inflation and general uncertainty. In this, we may share close similarities with the 52 English men, women, and children gathered with 90 Wampanoag warriors who participated in what is widely considered the First Thanksgiving. The most important thing to remember about the 1621 feast, at what is now Plymouth, Mass., is that the spirit of gratitude won over all other hardships not limited to cultural differences and economic deficiencies.

Praising the generosity, assistance, and friendship of the Wampanoag people and honoring the abundance of the North American continent, William Bradford, 30-year governor of Plymouth Colony, documented the 1621 feast. He wrote, “Instead of famine, now God gave them plenty, and the face of things was changed to the rejoicing of the hearts of many, for which they blessed God.”

The greatest gift gained that faithful day–memorializing the First Thanksgiving table and becoming a timeless example of the season–didn’t require an exchange of currency or the sacrifice of culture. A peace treaty was signed. And a model of friendship, respect, and diplomacy began for the New World. Each chair at that table signified gratitude for the fall harvest and, more importantly, provided the first representation of diversity and inclusion for Americans. There is hope in what began that day.

For as long as I remember, the Thanksgiving ritual of gathering with family, eating a feast, and watching football all afternoon marks the start of a season that belongs to an Almighty, Generous God. It means we pause and be present–becoming part of the season’s gift–so that we can find harmony with life despite what we have or don’t have. In that stillness, I find a natural, authentic practice of giving thanks and being generous.

Like the native people of the First Thanksgiving, giving thanks is as much a part of daily life for American Indians now as it was then. Each gift of the land is always followed with an offer of generosity–prayer, acknowledgment, or gifts. And for most Americans, gratitude isn’t delegated to one day of the year, but an everyday practice often similarly expressed through prayers, acknowledgments, and gifts. Thanksgiving Day offers every American significance. Though we are a nation representing a world of different cultures, perspectives, and economies, we unite and recognize a shared humanity in gratitude and generosity.

Closing this 5th annual Thanksgiving column from an American Indian perspective, I join my fellow Americans in the blessing of gratitude, the peace of our unity, and the bond of enduring friendship. May God forever teach us kindness toward each other. And may we share the highest honor of His generosity to all of humanity this Thanksgiving. Aliilamo (thank you).

David Sickey is the former tribal chairman of the Coushatta Tribe of Louisiana. Contact him at david.sickey@gmail.com.