McNeese burned by 3-point shot in loss to Lindenwood 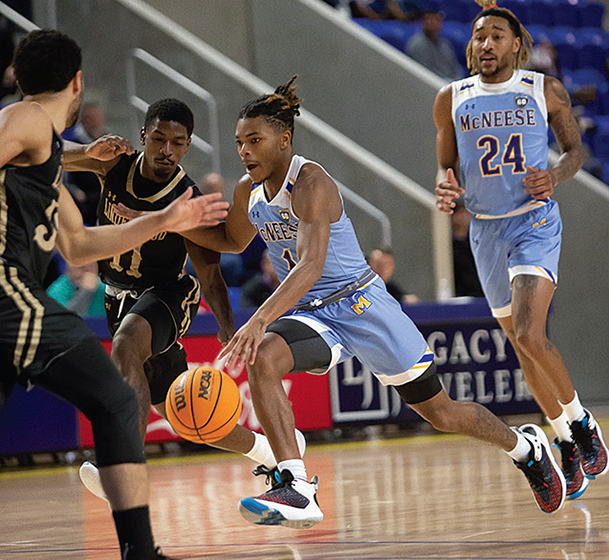 McNeese State’s Trae English dribbles through the Lindenwood defense on his way to the lane Saturday at the Legacy Center. English, a sophomore guard, came off the bench to score a team-high 12 points. (Rick Hickman / American Press)

It wasn’t quite a repeat performance, but the result was about the same.

For a second consecutive day McNeese State struggled in its own multi-team event.

This time it was Lindenwood riding the Cowboys out of their own corral, 78-60 Saturday at the Legacy Center.

Fueled by a 17-2 run midway through the first half, the Lions (2-3) rode roughshod over the struggling Cowboys. The loss dropped McNeese to 1-3 and still winless against Division I opponents.

“It has been a disappointing last couple of days,” said McNeese head coach John Aiken. “We have a lot of areas to address and get fixed. It’s part of the process.”

The biggest area is likely on defense, where the Cowboys got torched from afar for a second consecutive game. Lindenwood hit 10 of its 20 shots from distance while the Cowboys made eight but took 28.

Many of those Lions shots were uncontested or lightly defended.

“We are not doing a great job getting to the shooters,” Aiken said. “We are not closing out on them on time.”

Over the last two games McNeese opponents are 25 of 50 from beyond the 3-point arc. Saturday’s top beneficiary was Lindenwood guard Chris Childs, who hit 5 of 10 such shots while finishing with a game-high 21 points.

It was Childs and Caldwell who sparked a first-half run that gave the Lions a 29-13 lead with 6:37 before the half. Even a 9-0 run by the the Cowboys on consecutive 3s by Trae English, Zach Scott and Harwin Francois could only cut the lead to 32-27.

McNeese also finished with 18 turnovers that led to 25 Lindenwood points.

“We did not shoot the ball well,” Aiken said. “We are not getting quality shots and not enough quality possessions.

“When we are good, we’re really good. But when we are bad, the wheels fall off.”

Christian Shumate and English led McNeese with 12 points each. Shumate had nine rebounds but also six turnovers as well.

McNeese will try to salvage a game in this event today when they host Southland Conference rival Lamar in the finale.

The Cardinals (3-2) lost in overtime to Western Carolina 98-91 in the first game Saturday after beating Lindenwood Friday, also in OT.

Lindenwood will take on WCU in the opener at 11 a.m. today.

“We have a chance to turn things around starting today,” Aiken said.

Chris Pryor made three free throws for Lamar to force overtime tied at 85.

Woolbright added five rebounds and five assists for the Catamounts (3-2). Tyzhaun Claude scored 17 points and added seven rebounds. Tre Jackson recorded 16 points and was 6-of-10 shooting (4-for-8 from distance).

NOTES: The third official in the McNeese game was Blanca Burns, who also works NBA contests. Burns was in Memphis Friday night for the game between the Oklahoma City Thunder and the Grizzlies.