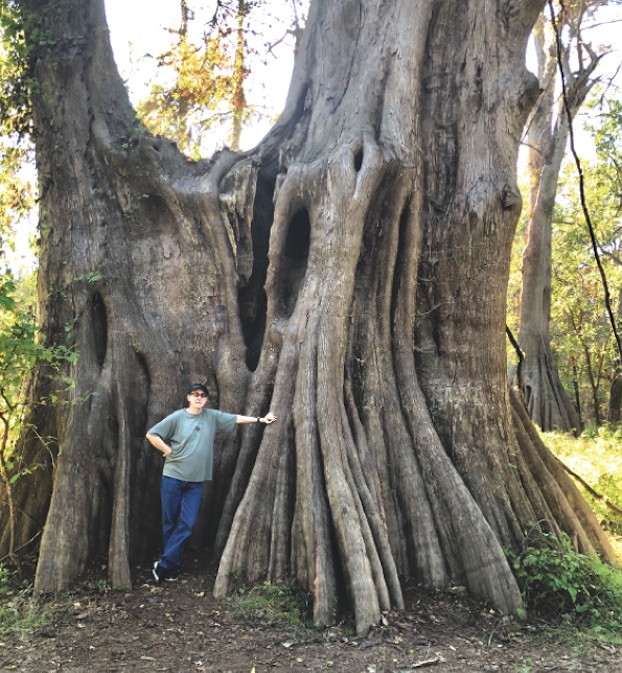 A Cat Island National Wildlife Refuge visitor poses for a photo at the base of the champion bald cypress tree on Nov. 11. (Donna Price / American Press)

The massive trunk of the tree looks like two trees that have grown together, but DNA testing has shown that it is indeed one tree. Signs at the park estimate the age of the tree to be 1,000 years. Information on the Cat Island National Refuge website page though, dates it at 1,500 years.

“Since the tree is hollow there is no way to give a definitive age for it, thus the large range in age estimates,” said William Daniel, president of the non-profit group Friends of Cat Island National Wildlife Refuge. “It is widely stated as being 1,500 years old. When I describe the tree, I usually give a range of 1,200 to 1,500 years.”

It’s not really an island at all, although when flooding occurs, parts of it can look like one.

“It is surrounded by the Mississippi River and Bayou Sara on three sides and the Tunica Hills on the fourth. This made it very hard to access for much of its history,” said Daniel.

The refuge can remain flooded for many months of the year, with this flooding typically starting in December and ending by June. When that happens, the champion bald cypress can be inaccessible, except by boat.

The Friends of Cat Island group is in the process of reconstructing a wooden observation deck around the champion tree. The deck was originally constructed approximately 20 years ago, according to Daniel.

“It sustained significant damage during last year’s flood event. We hope to have the work completed in the next couple of weeks if the weather permits,” he said.

Due to the entire refuge being submerged during the flood season, there are no other significant structures in it. Many areas of the refuge have 15-20 feet of water at the peak of flooding.

Because of that, there are no public restrooms, water fountains or picnic tables. Roads in parts of the refuge are primitive.

With a name like Cat Island, a visitor could understandably expect to see lots of cats there. Odds are they won’t see any.

One theory on how the area got its name, though, is that Cat Island had a population of large cats at one time, according to Daniel.

“Before the Refuge was formed, I personally saw a large cat late one evening while I was deer hunting on private land,” he said.

But if there are large cats on Cat Island, they can’t stay there all the time.

“Because of the frequent flooding, all populations of large mammals are considered transitory. During flood events these animals migrate into the surrounding hills,” said Daniel.

While visitors may not see cats, odds are high that they will see a dog or two. Dog owners are allowed to bring their pets  into the refuge if they are kept on a leash.

For visitor information, make a stop at the St. Francisville Historical Society at 11757 Ferdinand St. in St. Francisville. Visitor maps are available there, and at the entrance to the refuge.

There is no cost to enter the refuge. Other than viewing the champion bald cypress, visitors can enjoy fishing, hunting, hiking, paddling and wildlife viewing here.

There are a number of other large, old-growth cypress trees to see in the refuge in addition to the champion bald cypress. Several are located in the vicinity of the champion tree.

A primitive parking area is located at the start of this trail. Visitors are urged to keep a sharp eye out for signage because it can be easy to miss. The champion bald cypress is only about 4.8 miles from the refuge entrance gate.

Cat Island is a big place, and visitors are urged to take certain precautions.

“I urge all visitors to bring a partner, phone, and/or handheld GPS if they plan to venture through the more remote parts of the refuge,” said Daniel. “If they plan to visit alone, they should let someone know what part of the refuge they will visit. Being stranded on Cat Island at night is NOT a fun time.”

How to get there
from St. Francisville:
From Commerce Street, take Ferdinand Street one mile and take a right on Mahoney Road. Go three miles, cross the low-water crossing bridge and take a left on Creek Road. Take a slight left to stay on Creek Road. Creek Road continues to the Cat Island National Wildlife Refuge Entrance. Be aware that this route may not be accessible when river levels are high.