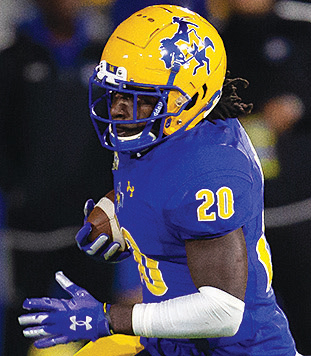 Looking to finish strong, the Cowboys welcome neighborhood rival Lamar for the Battle of the Border today.

McNeese State has begun the long rebuild back to what its hopes is championship status with mixed results.

At 3-7, the Cowboys are far from elite status, but with a pair of wins the last two weeks they have at least started what they hope is the accent back.

Lamar, which until late June wasn’t sure which league it would be playing in, is struggling as well in its return to the Southland Conference. At 1-9 the Cardinals are in danger of not even getting to its win total of two a year ago.

Both teams are 1-4 in SLC play, meaning the loser of this game earns at least a share of last place in the league.

“We want to send our seniors out with a victory,” said first-year McNeese head coach Gary Goff. “It is an important game for us.”

McNeese will honor 15 seniors before the game, but only four have been with the program for their entire careers. That shows the turnover the program has endured in recent years.

“We have been having small victories off the field and they are starting to show up on the field,” Goff said. “I’m proud of how many young guys have stayed focused and kept working.”

Lamar has had it even rougher than McNeese. The Cardinals, who have won their last two games in Lake Charles including a 27-26 overtime win in the spring of 2021, have lost 17 of their last 18 games.

They have allowed at least 35 points in seven of their games and no fewer than 47 in four of their last five.

“They are playing a lot of young people, like us, and trying to figure things out,” Goff said.

With the weather forecast calling for a chilling rain, the Cowboys can be expected to lean even more on the running game. That means SLC rushing champ Deonta McMahon should get plenty of work.

McMahon, a senior, is the first Cowboy to lead the conference in rushing since Todrick Pendland in 2008. He has 1,169 yards and is also tops in all-purpose yards at 1,642.

Last week he was joined by Marcus McElroy who finished with a career-high 136 yards and two touchdowns on 12 carries. The duo will test the Cardinals defense.

Despite a tough game last week, redshirt freshman Ryan Roberts will get his second consecutive start. Roberts was 7 of 19 with three interceptions against Houston Christian, though he did run for a score.

“Ryan didn’t play as bad as his stats showed,” Goff said. “We dropped two touchdown passes and had two of his interceptions hit off our hands. We have to help a young quarterback out and make plays.”

The Cowboys have been able to count on an improving defense, led by linebacker Kendall Williams and a young secondary.

“Our defense has played very well except for a few big plays lately,” Goff said. “We are very young but it is good to see the improvement.”